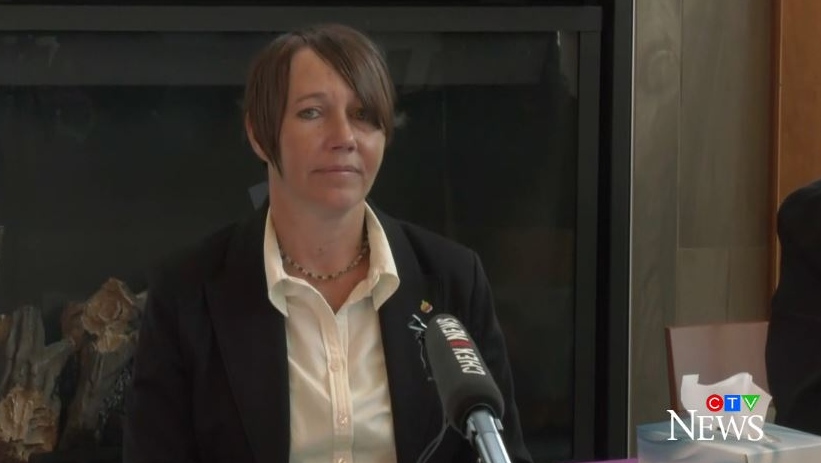 Tasha Brown, mother of allegedly adbucted toddler Kaydance Etchells, says she is preparing herself for the process of being reunited with her daughter. July 16, 2019. (CTV Vancouver Island)

The ordeal continues for an Nanaimo woman who is desperately trying to be reunited with her daughter, Kaydance Etchells.

Saanich police tell CTV News that efforts to extradite the girl's biological mother, Lauren Etchells, back to Canada to face charges related to child abduction have been thwarted by foreign authorities.

Police alleged that Etchells abducted the toddler from Saanich and from her other mother, Tasha Brown.

Etchells was arrested last month off the coast of England, along with her parents, after authorities on the island of Jersey spotted them landing on the small island in the English Channel with Kaydance and her half-brother in a small dinghy.

Saanich police and Crown prosecutors had hoped to have Etchells extradited back to Saanich to face child abduction and breach of custody order charges. But police now tell CTV News that Jersey officials are not supporting an extradition.

"They have not recognized Tasha Brown's rights as a parent over Kaydance, and therefore they don't recognize that there's a child abduction scenario that is extraditable from their end."

Saanich police say Jersey authorities are not acknowledging Brown as one of Kaydance's parents because her name doesn't appear on Kaydance's birth certificate.

Brown is currently in Jersey trying to reconnect with her daughter.

“On the advice of my lawyer I will not be commenting at this time,” Brown said in a statement Monday.

Police say Kaydance is currently in the custody of Lauren Etchells' parents in Jersey. Meanwhile, Etchells has been released from custody and remains in Jersey.