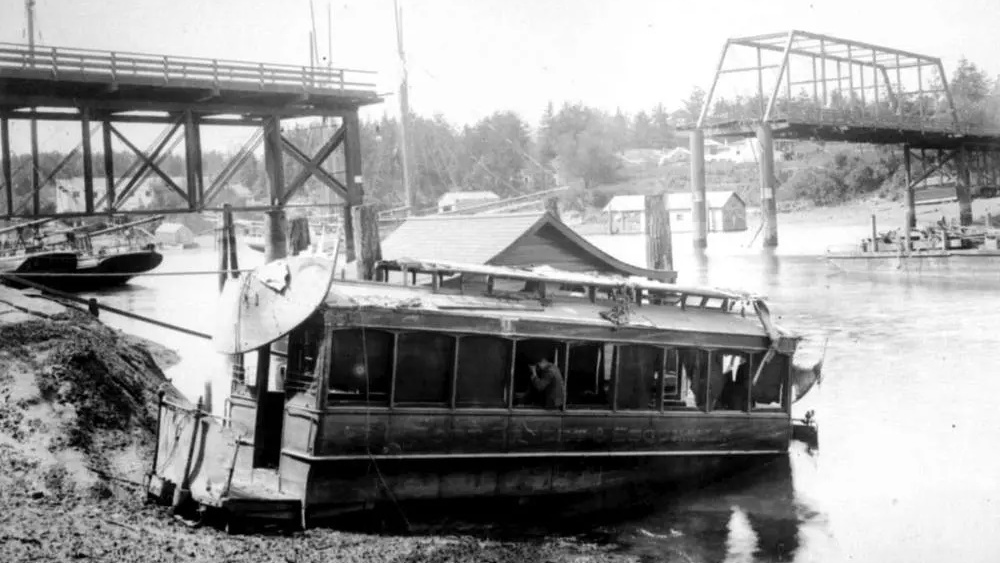 The damaged street car is seen towed to shore after the bridge collapse: (Point Ellice House / Royal BC Museum Archives)

VICTORIA -- Wednesday marks the 125th anniversary of one of the deadliest events in Victoria's history.

On May 26, 1896, 55 people died after the Point Ellice Bridge, also known as the Bay Street Bridge, collapsed while a fully loaded streetcar was crossing over it.

Crowds were gathered near Victoria's upper harbour on the late spring day just before the turn of the 20th century to celebrate Queen Victoria's 76th birthday.

To celebrate the monarch's birthday, events had been planned for the harbour area, including a mock naval battle that was set to take place in Esquimalt.

Before the re-enactment could take place, tragedy struck the Point Ellice Bridge. According to the Point Ellice House Museum and Gardens, the bridge collapsed when a streetcar filled with 143 passengers crossed over it.

"Due to lacking safety standards, poor bridge maintenance, and the overcrowded car, the streetcar fell into the water as the bridge gave out beneath it," reads the Point Ellice House website.

A gruelling rescue involving boats and divers was then launched, and it would take days for dozens of bodies to be pulled from the waters off Victoria.

According to Point Ellice House, the O'Reilly family lived on the property for more than a century before selling the site to the province in 1975 to be kept as a historical landmark.

One day after the bridge disaster took place, Peter O’Reilly described the ongoing rescue efforts as seen from his nearby home, according to Point Ellice House.

"Very bright sunshine – but a day of mourning – four divers still engaged in the endeavour to recover the bodies from the wreck of yesterday – vast crowds surround the fatal spot – boat launches steamers and a large derick [sic] constantly at work. 49 bodies taken out up to the present," he wrote in a personal diary.

The O'Reilly's also kept a large framed painting depicting the event inside of their house, according to Point Ellice House executive director Kelly Black.

"The diary entries obviously detail the impact it had on the family and of course the fact that they have a large framed image of the aftermath of the disaster indicates the power that it had on the memory of the house," he said.

He adds that the O'Reilly family and nearby neighbours were some of the first people on scene to try to help rescue survivors of the bridge collapse.

One of the neighbouring households, the Grant family, used their property as a temporary open-air morgue shortly after the disaster, according to Black.

Point Ellice House is the last structure in the area to remain standing since the tragedy took place more than a century ago.

"As the sort of last witness to the event, Point Ellice House is an important place for remembering these kinds of events in Victoria history," said Black.

The Point Ellice House Museum and Gardens recently reopened its garden area and temporary visitor centre on Victoria Day. Tours inside the house are still closed, however, due to COVID-19.

Point Ellice Bridge has been remade and repaired multiple times since the bridge collapsed 125 years ago. The most recent upgrades were completed in late 2019.