Victoria police are hoping to speak with any occupants of a vehicle that drove past a family's home on Caledonia Avenue moments before the home went up in flames.

The fire began shortly after 1 a.m. Wednesday at a home in the 1100-block of Caledonia Avenue.

The pastor says his wife called out to him from the first floor after she noticed someone pouring gasoline into the house through the home's mail slot.

"The moment that someone heard her, this is when the fire started," he told CTV News.

Vyshnevskyy's oldest daughter, 11, was injured as the children were passed from a second-storey window to the ground.

It was an ordeal that the pastor describes as "hell." 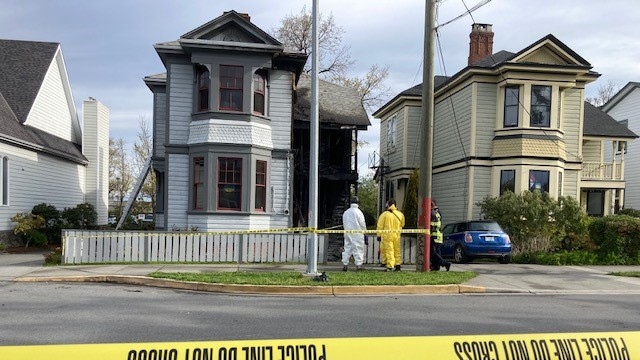 Victoria police are now hoping to speak with anyone who was inside a light-coloured four-door vehicle that drove past the home "moments before the fire was set."

Police released a surveillance video of the car Thursday, which is played twice in a row, once at regular speed and another time at half speed.

Investigators are hoping to identify who was in the car and speak with them as part of the investigation. Police are also asking for anyone witnesses, dashcam footage, or video footage of the area between midnight and 1:30 a.m.

Earlier Thursday, the Ukrainian Canadian Congress urged VicPD to investigate the fire as a hate crime, noting that Vyshnevskyy is an avid supporter of Ukraine amid Russia's invasion.

On Wednesday, police said that it was too early to determine what the motive may have been, but that investigators have not ruled anything out.

With files from Todd Coyne.