Police and firefighters are investigating after a family of five, including three children, narrowly escaped an arson attack on their Victoria home overnight.

Yuriy Vyshnevskyy, a Ukrainian Catholic church pastor, says he awoke around 1 a.m. Wednesday to his wife frantically calling out to him from the first floor of their home. 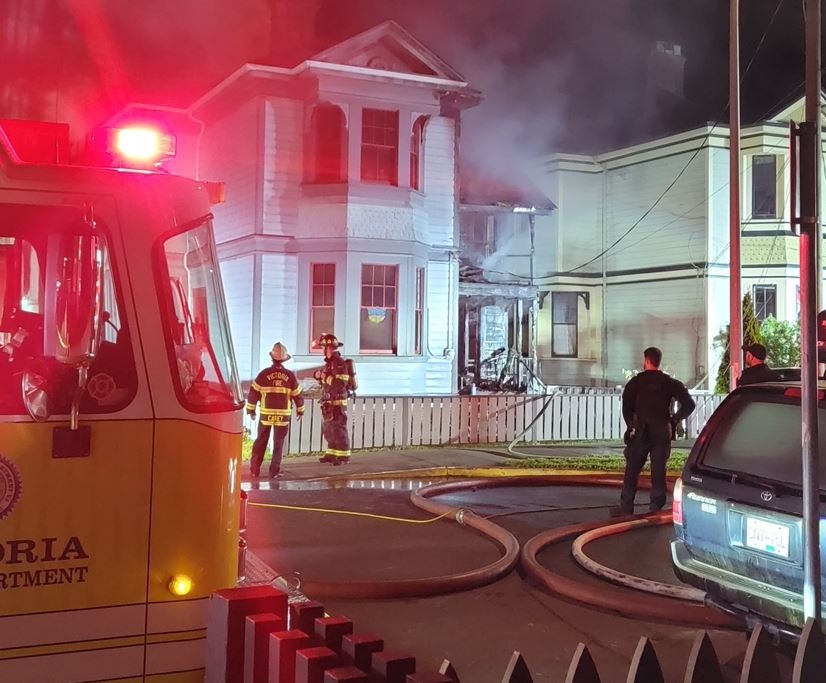 She woke up to a "gulp, gulp" sound as gasoline was being poured through the mail slot next to their front door, Vyshnevskyy said.

Before Vyshnevskyy reached the bottom of the stairs, the gasoline was set ablaze while his three daughters, ages 5, 7 and 11, slept upstairs.

Firefighters were called to the two-storey heritage home at 1112 Caledonia Ave. at 1:15 a.m. and immediately found the mother clinging to a second-storey window as the house burned.

"The flames were going from the ground level all the way to the roof," Victoria fire battalion chief Doug Carey told CTV News. "There was also a female occupant of the house clinging to the window ledge on the left side of the house here."

Firefighters attacked the flames with water while others got a ladder up to the window and rescued the woman from the ledge.

"The father ran down the stairs through the flames to escape the house," Carey said. "The mom woke up the children, took them into the one bedroom and shut the door behind her and then passed one child through the window to dad below, then another child down."

"The third child didn't wait," Carey said. "She jumped and was injured slightly on her way down."

Vyshnevskyy said his eldest daughter was treated in hospital for cuts she sustained from broken glass.

The daughter who jumped received stitches and is "in good condition," Carey said. "The parents are both really shaken."

All five family members were treated for smoke inhalation, according to police. 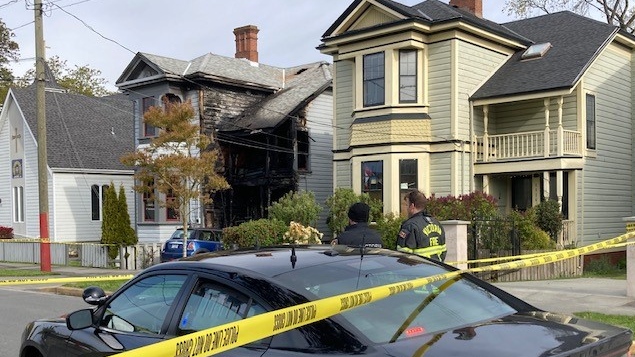 A two-year-old tabby cat, named Tony, was found during an initial search of the building.

"He was totally unconscious, I thought he was deceased," the battalion chief said. "Our crews used a special pet resuscitation device – it goes over the nose of the cat – they gave him oxygen and Tony's now in stable condition at the central Victoria animal hospital."

Seventeen firefighters and six trucks responded to the blaze.

"This fire is suspicious and under investigation by Victoria police and Victoria fire," Carey said.

The Victoria Police Department says detectives with its major crime unit are investigating the fire as arson.

Police are asking anyone who may have witnessed the incident, or who may have dashcam or surveillance footage of the area around Cook Street and Caledonia Avenue between midnight and 1:30 a.m., to come forward.

The house belongs to the Ukrainian Catholic Church of St. Nicholas the Wonderworker, located next door.

Police are investigating whether there is a connection between the arson and community tensions around the ongoing war in Ukraine, including whether the attack constitutes a hate crime.

"There has been some questions surrounding this, given the structure's proximity to a Ukrainian Catholic church," MacIntyre said, but added investigators have "nothing to indicate motive at this point."

"Sometimes there is simply an arsonist that is in the community," the police spokesperson said. "Other times these incidents are targeted. It's too early in the investigation for us to say."

"Horrible news to learn of this suspicious fire last night, but I'm relieved everyone was able to escape," the premier said. "Father Vyshnevskyy has been working to help Ukrainians fleeing violence, and I know the local community will rally around his family now."

"Our goal in this is to locate a suspect, or suspects, and arrest them," MacIntyre said, reiterating a plea for witnesses to come forward. "We have some information but we need more."

Cook Street remained closed to traffic at Caledonia Avenue on Wednesday, while investigators combed the scene.

According to the Victoria Heritage Foundation, the home was constructed in 1891 by renowned architect and former Victoria mayor John Teague.

An online fundraiser for the family has been started by a board member of the local Ukrainian Cultural Centre.

With files from Robert Buffam and Kirk Duncan