Victoria has a new top cop, and while he might not be the most qualified for the job, no one is questioning his heart.

Fulfilling a wish, Kaiden Finley was sworn in as Victoria police chief for a day Wednesday.

The 11-year-old Victoria boy wasted no time kicking his feet up on the desk of current Chief Const. Del Manak. 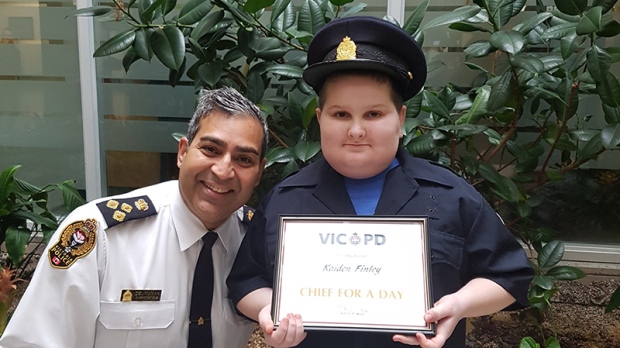 "First time in our 160-year history that an 11-year-old has been appointed chief for a day," said Manak.

Kaiden's day started off with treatment befitting a police chief, getting a police escort on his way to work, fielding photo requests and even signing a contract to make the job title officials.

"What was kind of shocking is that Chief Finley actually got a louder round of applause than I did when I was sworn in, so that's kind of nerve-racking," said Manak.

Couldn't think of a kid more deserving to run @vicpdcanada for a day. #YYJ's new top cop who we're all rooting for. Meet Kaiden on @CTVNewsVI tonight. @ChiefManak @TourdeRock pic.twitter.com/rigkblLRvY

The youngster is no stranger to the public eye. CTV News viewers met him last fall when the Tour de Rock stopped in Parksville for an impromptu hug as Kaiden battled cancer.

"He relapsed in September while we were riding down the island and was given a pretty poor prognosis," said Alli Roberts, Kaiden's 2018 Tour De Rock rider.

At the time, he had just found out that the brain tumour he had once beat had returned.

"They found six tumours. Two sort of on his brain stem and four in his spinal column," said Roberts.

Since then, Kaiden's prognosis has not improved. While you would never know it with his smiles lighting up VicPD headquarters, the 11-year-old is in a fight for his life.

"We believe that there's still hope, and so we're showing him that there's a community of people behind him," Roberts said.

Kaiden said he had a blast stepping into the police chief's shoes for the day, but his favourite part? "The chair," he said, adding a trip to Tim Hortons was also on the schedule.

Manak said Kaiden's takeover as police chief Wednesday is "what we're all about" as a department.

"It's really important that we support everyone in our community," said Manak. "We had a special opportunity today…[to] highlight that real people, real kids and families are dealing with major, major health issues. Today was a day where I as a chief and members of the Victoria Police Department could really make somebody feel special."

And if Wednesday was any indication, the department could also use somebody of Kaiden's calibre behind the big desk one day.

Kaiden's family is asking anyone who sees his story and wants to help to consider walking in the Victoria Brain Tumour Walk taking place Sunday, May 26, at the University of Victoria.