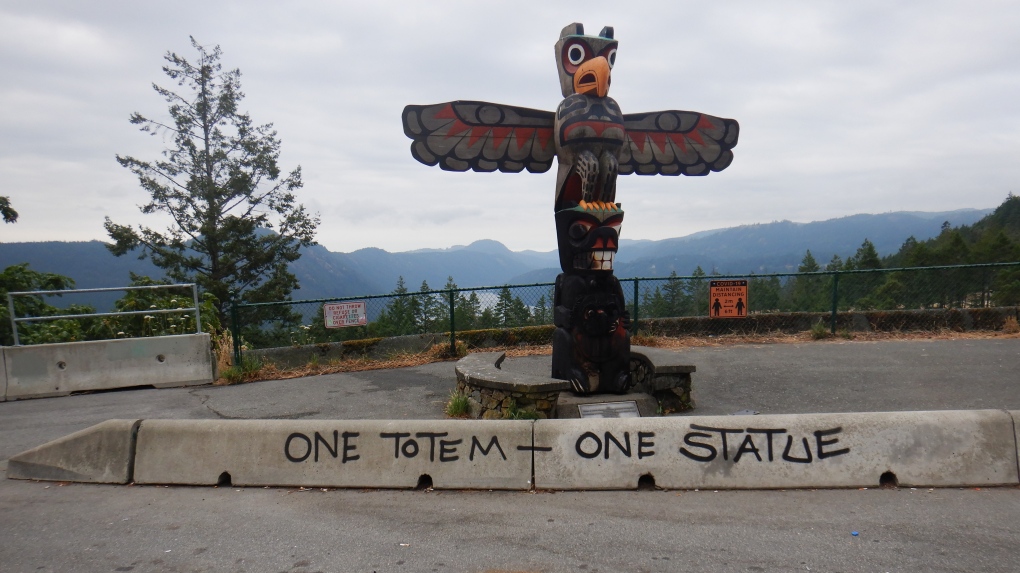 Shawnigan Lake RCMP were contacted just after 4 a.m. on July 2, 2021, when a driver saw that the totem pole at the Malahat lookout was on fire. (RCMP)
Victoria -

Mounties on Vancouver Island are investigating after a totem pole was set on fire in an apparent act of retribution for the toppling of a statue in Victoria just hours earlier.

Shawnigan Lake RCMP were contacted just after 4 a.m. Friday when a driver saw that the totem pole at the Malahat lookout was on fire.

Police and the Malahat Volunteer Fire Department responded to the scene along the Malahat highway.

“The quick thinking of the passing motorist likely saved not only the totem pole, but also a forest fire,” said Shawnigan Lake RCMP detachment commander Sgt. Tim Desaulniers in a statement Friday. “This was a very dangerous act that could have had far reaching consequences.”

Mounties say evidence has been seized from the scene and a forensic identification team is assisting investigators in the case.

Graffiti was found on a concrete barrier in front of the totem pole with the message, “One totem – one statue,” in an apparent reference to the removal of a statue of Captain James Cook in Victoria’s Inner Harbour Thursday night.

“Based on what was written, we feel the two incidences are related,” Desaulniers said.

Anyone who witnessed the incident or has video evidence from the scene is asked to contact the Shawnigan Lake RCMP at 250-743-5514.