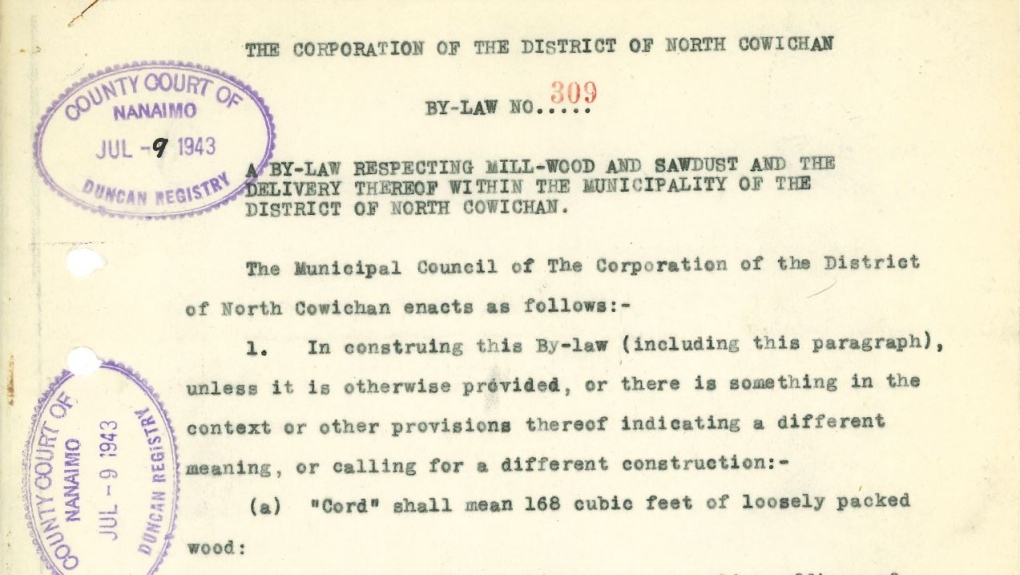 A 1943 bylaw regulating the sale of wood and sawdust in North Cowichan is one of several bylaws to be repealed in the purge. (Municipality of North Cowichan)

VICTORIA -- A small Vancouver Island municipality will no longer prohibit teenage girls from selling newspapers, nor will it regulate the size of wagon wheels on the town square, thanks to some trailblazing work from its mayor and council.

The North Cowichan municipal government has moved to repeal some 52 outdated bylaws – many on the books for well over a century.

"We had a bylaw on the books [the Fence Viewers Bylaw of 1967] that we would hire somebody and would pay them a few bucks a day to walk the fences to make sure that a) the cattle weren’t getting out and b) the fences were in the right place," said Mayor Al Siebring at the Dec. 4 meeting of North Cowichan council.

"There was another that said no person shall ride or drive any beast at a pace exceeding six miles an hour."

The audit of outdated bylaws was undertaken by the municipality's Regulatory Review Committee which then crafted a Miscellaneous Bylaws Repeal Bylaw on Nov. 22.

"This is a fulfilment of a commitment that I actually made on the campaign last year," said Siebring.

"If we are successful with repealing these, it's important to note that it will now be legal for 16-year-old girls to sell newspapers," said Coun. Christopher Justice.

Other regulatory curiosities the North Cowichan government will no longer concern itself with include age restrictions on the use of vending machines, raw milk sales, the permissibility of Sunday sports, the construction of wash houses and the lewdness of plays.