Van ends up in front yard in Victoria rollover crash 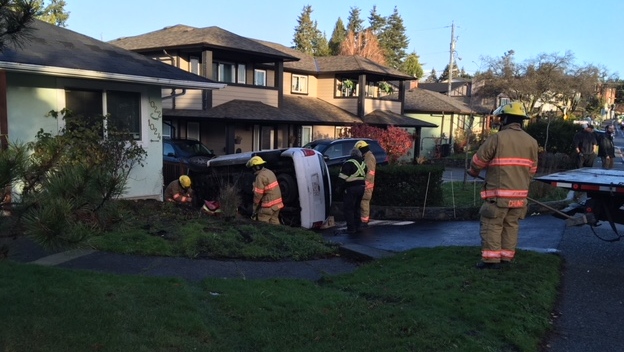 A property sustained minimal damage when a van careened off Tillicum Road and rolled over in a driveway. Nov. 27, 2018. (CTV Vancouver Island)

A property sustained minimal damage when a van careened off Tillicum Road and rolled over in a driveway.

It happened in the 1000-block of Tillicum Tuesday morning.

While it's unclear what caused the crash, a white van ended up on its side in a front yard.

A woman living at the home said she was getting ready for work when she heard a loud bang.

"Came running outside and saw a guy climbing out of the window of the car, and there was a car on its side in our driveway," she said.

Officials shut down the road as they dealt with the scene. It reopened shortly after 9 a.m.

Minimal damage was done to the home. The extent of injuries suffered by the driver involved is unknown.