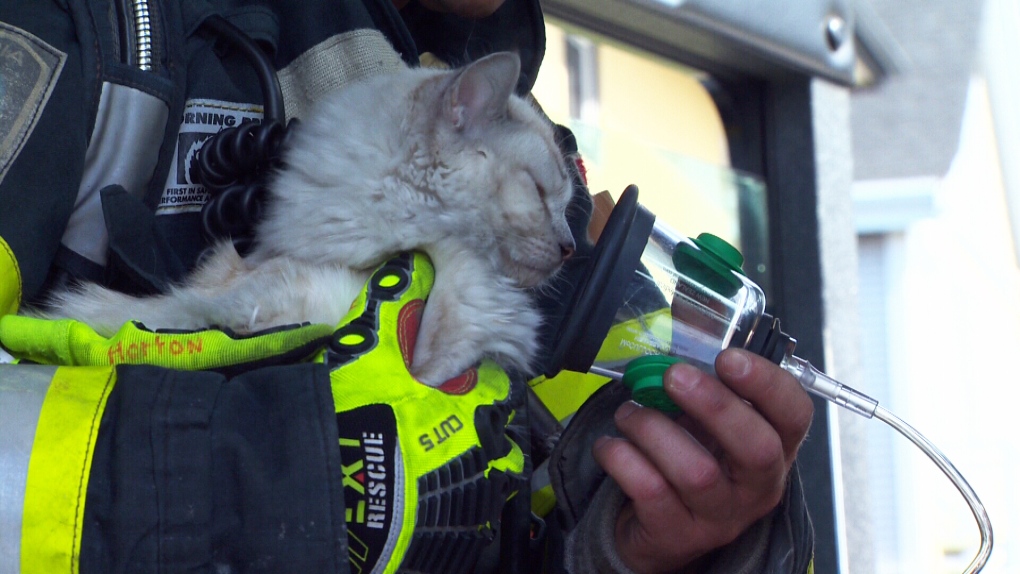 A cat is treated with a pet oxygen mask after fire broke out at a Dallas Road apartment Thursday, April 21, 2016. (CTV Vancouver Island)

The animals were fine in the end, and no one suffered any injuries, according to Victoria Fire Department.

Crews were called to the building on Dallas Road at Boyd Street for a report of smoke emerging from a basement suite.

Nobody was home at the time and the first firefighters on scene discovered debris burning in the corner of the unit, according to Capt. Gord Taylor.

“It was caught just in time. The smoke was travelling across the ceiling and was getting ready to ignite,” Taylor said. “There was a lot of heat, it’s melted everything up in the top.”

The flames were extinguished right away and smoke damage was confined to the one unit.

Crews also discovered two frightened cats in the apartment and treated them with pet oxygen masks out of precaution.

“The cats were hiding, they were cowering under the bed, so we had to pull them out and bring them outside, get them out of the smoke,” Taylor said.

The cats were being held in a fire truck until the owner arrived at the scene, he said.

Investigators are now looking into what caused the fire.