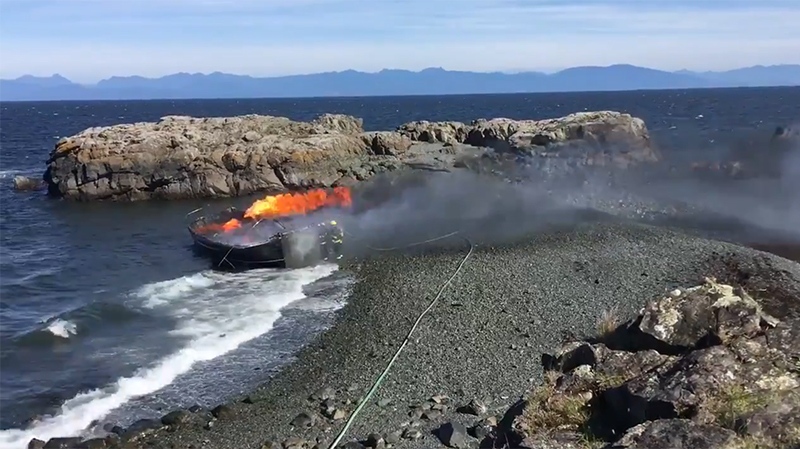 Three people were rescued from a burning boat off the coast of Nanaimo Thursday morning.

Fire crews were seen trying to put out the stubborn blaze on the shoreline of Neck Point Park. The boat was reportedly towed to shore so fire crews could attack it from the ground.

Three people onboard were transported to hospital with unknown injuries. Rescuers say they were all wearing lifejackets at the time.

The boat appeared to be completely charred by flames.

Fire crews eventually decided to let the boat burn out due to heavy wind and because it would have less environmental impact.

"The wind was a big factor for us. We actually had the vessel behind us almost successfully extinguished but the wind here, it was an uphill battle and unfortunately mother nature won," said Capt. Tom Krall of Nanaimo Fire Department. "The boat is going to have to be recovered by a contractor."

A spill response vessel was on scene as a precaution and a boom was set up around the boat in case of any fuel leaks. A Coast Guard hovercraft was also called in.

The cause of the fire remains unkonwn.

Fire crews in #Nanaimo currently trying to put out stubborn boat fire at NeckPt Park. Witness says three people on board had to be rescued. @CTVNewsVI pic.twitter.com/1k241jNbK4