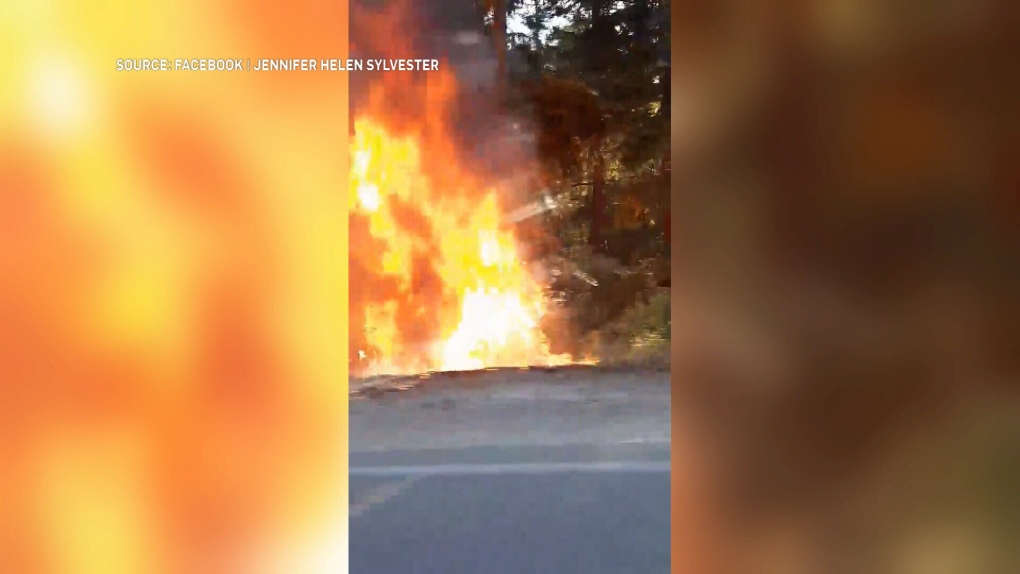 RCMP say speed may have been a contributing factor in a fiery collision in Shawnigan Lake late Sunday night. July 22, 2018. (Facebook)

Commuters have been faced with a tough 24 hours on southern Vancouver Island roads.

A crash on the Trans-Canada Highway in Ladysmith locked up traffic for hours early Monday morning.

The crash occurred just after 6 a.m. in the intersection of the highway and South Davis Road.

A small car was trying to cross the highway and ended up in the path of a big truck, which swerved to miss the car but ended up clipping it.

The truck then hit a median and flipped onto its side.

The driver of the truck was okay, but two people in the car – a 62-year-old woman and a 73-year-old man – were taken to hospital with what were described as serious injuries.

Traffic was rerouted to South Davis Road for several hours while RCMP traffic reconstructionists worked on the scene.

RCMP say speed may have been a contributing factor in a fiery collision in Shawnigan Lake late Sunday night.

Officials say a passerby came across a vehicle that had gone off-road on Shawnigan Lake Road.

Video shows massive flames shooting from the wreckage, appearing to light nearby trees on fire.

Four people were sent to hospital, according to RCMP. Their current condition is unclear.

Mounties say alcohol is not suspected in the crash, which remains under investigation.

Late-night traffic jam on the Malahat

A third crash bogged down traffic on the Malahat for hours Sunday night.

It's unclear exactly what happened, but pictures from the scene posted to Facebook show at least two vehicles damaged in the collision.

The crash tied up Malahat traffic for hours, but construction has also become a consistent headache for highway commuters.

The Ministry of Transportation says there is about two months left of nighttime paving work on the Malahat as part of an ongoing safety upgrade project.

It's not expected to completely eliminate the bottlenecks the highway is known for, as there will still be a significant stretch of two-lane highway remaining through Goldstream Park even after the project is completed.