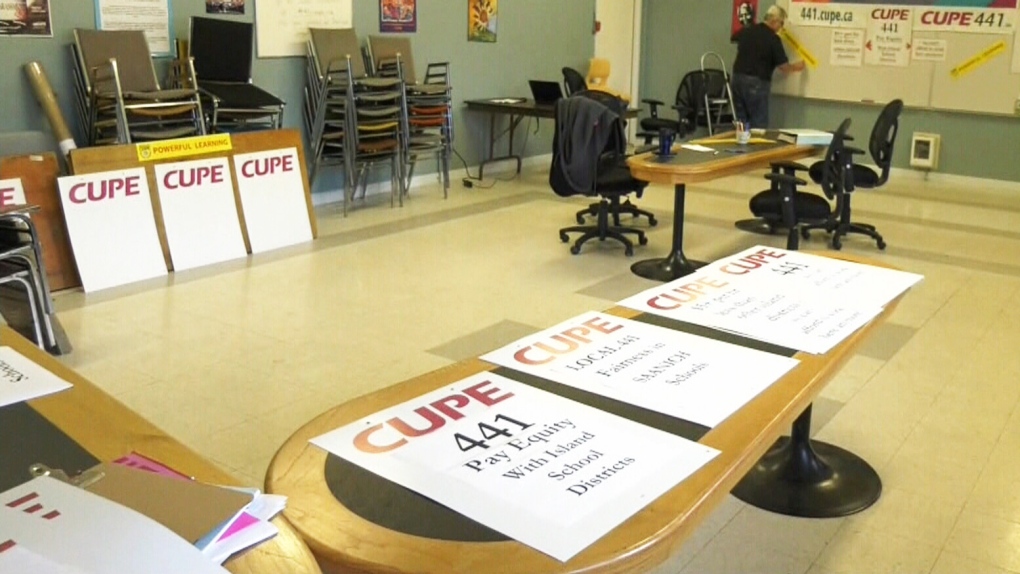 CUPE local 411 signs are seen in this file photo. (CTV)

VANCOUVER - The union representing support staff in the Saanich school district says it will go ahead with a strike beginning on Monday, leaving schools closed and parents scrambling to find alternative arrangements for their children.

The Canadian Union of Public Employees local 441, which represents roughly 500 workers who provide support to teachers and district operations, announced Sunday that it intends to proceed with a "full withdrawal of services."

Because the Saanich Teachers' Association, which represents teachers in the district, will not cross the CUPE picket line, all schools in the Saanich school district will be closed on Monday.

In an announcement posted on its website, the school district asked parents and guardians to make alternative arrangements for their children.

"We apologize for the considerable inconvenience that this strike creates for our community," the district said. "We continue to request that CUPE meet with us to carry on negotiations within the agreed upon provincial parameters."

Saanich Parks and Recreation announced last week that it would be offering "school closure camps" for children ages five to 11 each day this week. Registration began Friday and was limited to 20-35 children per day-long session. As of Sunday morning, all five camp sessions had already been filled.

Schools superintendent Dave Eberwein told CTV News Vancouver Island the district received confirmation that the strike would happen Saturday night. He said it's "very disappointing" that schools will be closed on Monday.

"I certainly empathize with our support staff and the fact that they are looking for complete wage redress in this round of negotiations," Eberwein said. "They are certainly critical to the operation of our schools."

The problem, according to the superintendent, is that the school district is limited in terms of how much additional money it can provide to the striking workers.

"Like CUPE, we are bound by a provincial framework, which is part of a mandate that was agreed to over a year ago," Eberwein said. "Within that mandate is a set amount of funds that can be applied towards wages. We have done everything we can to maximize all of the money within that mandate."

The union's complaint is that many support staff in Saanich are compensated far less than people doing equivalent jobs in nearby school districts, such as Victoria and Sooke, and have been for decades.

Eberwein said the provincial framework limits the district to salary increases of six per cent over a three-year contract. Other available funding has also been applied in the district's latest offer, the superintendent said.

"For those positions that are further behind, we have applied a greater amount of redress to those, to bring them closer in line, but everybody in the employer's offer would get more than the six per cent," he said.