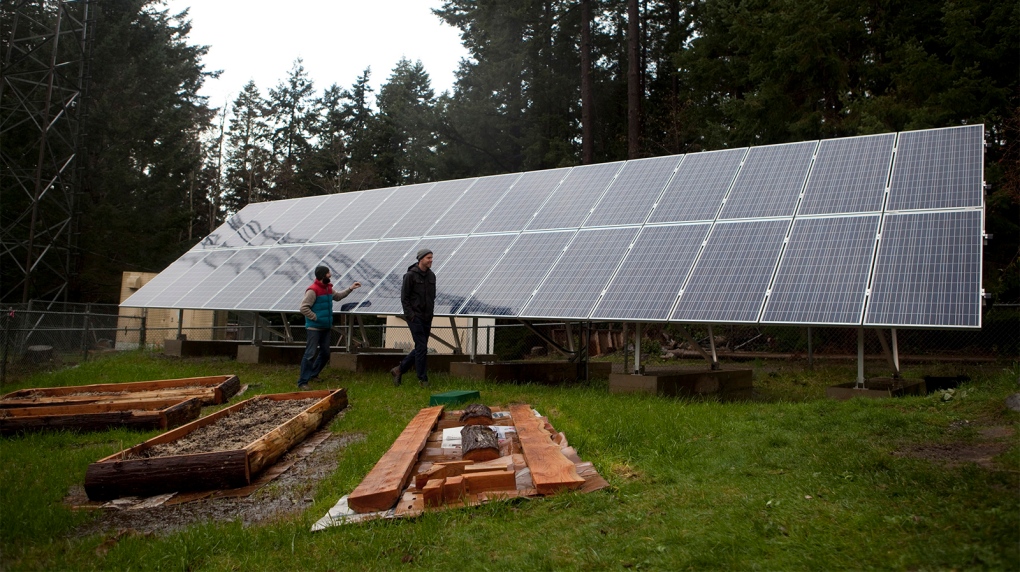 False Bay school, on Lasqueti Island, B.C., Thursday, November 24, 2016 is off the grid and no longer relying on diesel generators for power was built in 1953. The school has since converted to solar energy in March 2016. (THE CANADIAN PRESS/Chad Hipolito)

That was when Principal Reid Wilson discovered the school's back-up power source, a diesel generator, had broken down and the West Coast school had been running totally on solar energy during the dark, wet, dreary October days.

“It was just kicking out tons of power to the point where we virtually didn't run our generators at all,” he said, standing in the school's solar-panel storage shed as rain pelted the roof.

“We didn't even know (the generator) was broken for a while,” Wilson said.

School was cancelled for two days to fix the machine.

Wilson said what started as an over-the-fence conversation between neighbours about renewable energy a decade ago, turned into a project to bring solar power to the 30-student, kindergarten to Grade 8 school.

Lasqueti Island, named by a Spanish naval officer in 1791, is located off the east side of Vancouver Island in the middle of the Strait of Georgia.

The island is known as a counter-culture enclave of about 450 people, attracting artists, tinkerers and hermits. There's a food co-operative and a free store offers recycled goods, including furniture, books and clothes. Art shows and festivals are regular year-round events.

It is accessible by passenger-only vessels and off the provincial power grid, which forces residents to embrace alternate energy options to light their homes and power their appliances.

The formal flick of the solar switch at the school happened last March, and the results have been illuminating, Wilson said.

“This model was somewhere in the order of $300,000 to put in, mostly funded by the taxpayer, but the payback period is ... about $25,000 a year of saved fuel,” he said. “I imagine in a little over a decade, essentially as far as the taxpayers is concerned, we're going to be powering our school for free.”

Wilson, who has lived on Lasqueti Island for 13 years, said his home is powered by solar panels and a water turbine connected to a neighbour's pond.

“Myself and virtually everybody on the island have solar panels and renewable energy at home,” he said. “I have a little water wheel that sits on my neighbour's property, and the water wheel I have is made out a record turntable motor inside a salad bowl.”

Wilson said the turntable spins out 80 watts of power during the winter months, enough to light his home, and “when the ponds dry up we turn off the water wheel and go to solar.”

Executive Director Paul Kariya said the community is a leader in fighting climate change by reducing dependence on fossil fuel.

The school project will cut diesel fuel use from about 16,000 litres annually to about 6,000 litres, reducing carbon emissions by about 28 tonnes a year, he said.

Tom Hackney, with the B.C. Sustainable Energy Association, a non-profit group supporting sustainable production and distribution of energy in B.C., said solar power costs have dropped to near “grid-parity” with B.C. Hydro.

He said solar power has quickly become an option that deserves consideration for public and private projects.

“Our vision would be way more energy of this kind on way more roofs.”

Daniel Jacobs, a 43-year Lasqueti resident, said most people on the island use solar power in their homes, but the school, with its loud and dirty diesel generator belching fumes, had become an environmental blight on the community.

“It was an embarrassment, basically,” he said.Wilson said it took a decade to convince school district officials solar was the way to go - but things are brighter now.