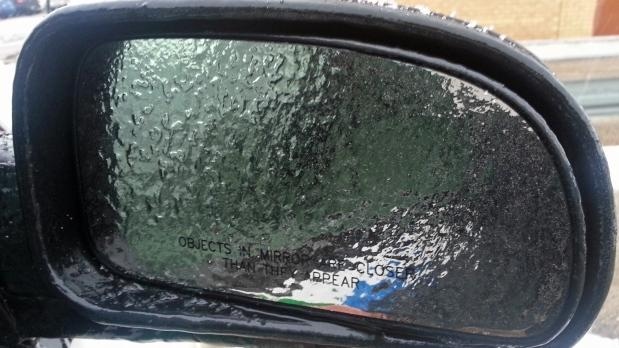 Freezing rain has left a glaze on a car's rearview mirror in this undated file photo.

The potential for freezing rain on parts of Vancouver Island overnight has prompted a special weather statement from Environment Canada.

The agency says there's a risk of wet snow and freezing rain for inland valleys on east Vancouver Island from Courtenay to Campbell River and Nanoose Bay to Fanny Bay, as well as inland Vancouver Island.

Winds will strengthen in coastal areas along the Strait of Georgia later tonight, but temperatures are expected to remain above freezing.

"For areas further inland, and those still under the influence of outflow conditions from the mainland inlets (such as Campbell River), wet snow is the likely outcome and a few centimetres of snowfall accumulation can be expected," Environment Canada said.

While not everyone may be cheering on the arrival of winter weather after a relatively sunny week, Mount Washington likely is.

The ski resort was forced to postpone its opening day from Dec. 7 to an undetermined date due to the lack of snow on the hill.

Resort officials have said they want just below a metre of snow before they start up operations.