Approximately 200 seniors gathered on the lawn of B.C.'s legislature in Victoria on Thursday to protest old-growth logging in the province.

The seniors say they're calling for a recently approved two-year deferral of old-growth logging in areas of Vancouver Island to be extended across the entire province.

Some of the seniors say they're willing to be arrested for their beliefs, and about two dozen spread across a downtown Victoria street, blocking vehicle access.

"The premier and his cabinet need to keep their election promises to implement the old-growth strategy report in its totality," said 92-year-old Clare Lowery in a statement Wednesday. "We cannot build a future on broken promises."

Last week, three Vancouver Island First Nations notified the province that they would be suspending all old-growth logging activity on their lands for the next two years as the nations worked on long-term resource stewardship plans.

On Monday, forestry company Teal-Jones said it would abide by the First Nations declaration, and on Wednesday the B.C. government accepted the request.

The deferred lands include 884 hectares of old forests in the Fairy Creek watershed, near Port Renfrew, and 1,150 hectares of old growth in the central Walbran valley, near Lake Cowichan, where protesters have been set up since August 2020. 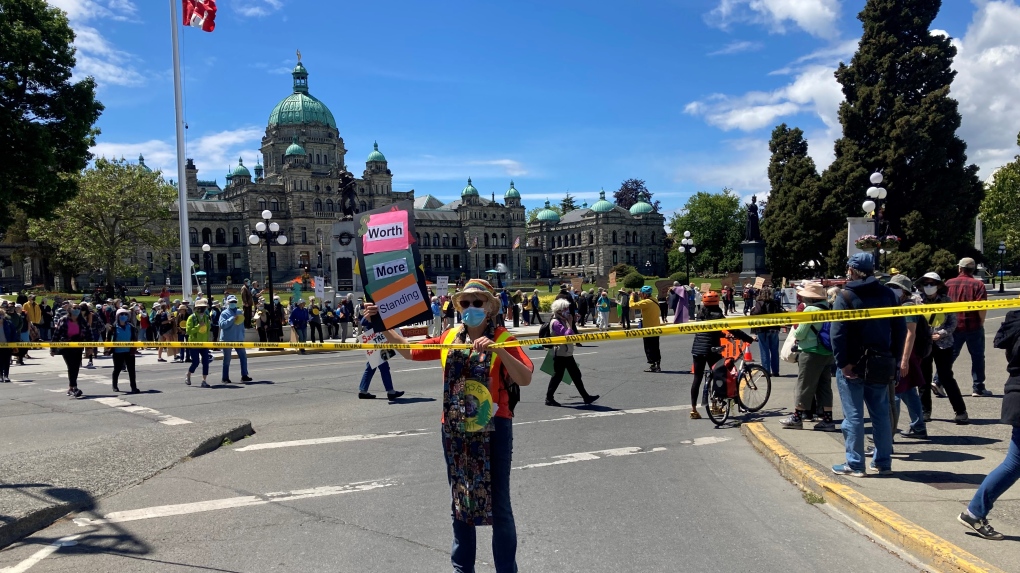 Seniors are seen protesting old-growth logging outside of the B.C. legislature on June 10, 2021: (CTV News)Despite the two-year deferral, some say the suspension does not go far enough.

Protesters in the Fairy Creek watershed say "very few have left" after news broke that the deferral had been approved on Wednesday.

The three First Nations behind the deferral – the Huu-ay-aht, Ditidaht and Pacheedaht – say no other groups have a right to speak on their behalf.

"We expect everyone to allow forestry operations approved by our nations and the Government of British Columbia in other parts of our territories to continue without interruption," said the nations in a joint statement Wednesday.

"I’m hopeful that those who have taken to the roads of southern Vancouver Island will understand that this process is not one that can happen overnight," said Horgan.

UPDATE | After moving to the Empress Hotel lawn, the protest group has dispersed. #yyjtraffic in the area is now back to normal. https://t.co/vF2i5MyDyN

Trudeau vows to 'get back to work,' as Liberals win election but fall short of majority

Liberal Leader Justin Trudeau is vowing to get 'back to work,' after being dealt a second minority government in the 2021 federal election that looks much like the one Canadians elected in 2019.

The Conservative Party has come up short, failing to dethrone the now three-term Liberal Party. Leader Erin O'Toole conceded defeat in the early hours of Tuesday morning, after the Liberals secured a minority government win.

Here's what Trudeau's Liberals have promised for their third term

Liberal Leader Justin Trudeau and his party have won a minority government on a platform of promises that included billions of dollars in new spending to rebuild the country from the COVID-19 pandemic.

A 36-day federal election campaign came to an end with a result that will give the Liberals another minority government. Replay the CTVNews.ca live blog from election day.

NDP may hold the balance of power in Parliament

Jagmeet Singh and the New Democrats may hold the balance of power in the next Liberal minority government by playing a key role in helping pass confidence matters and key legislation.

The Green Party is sending more than one MP to Ottawa for just the second time in its history, even as it appeared to lose a significant amount of the voter support it received in 2019 and its leader didn't come close to winning her desired seat.

The Canadian dollar strengthened against its U.S. counterpart in Asian trading on Tuesday as oil prices rose and a projected election win for Justin Trudeau's Liberal party reassured investors that economic support would continue.