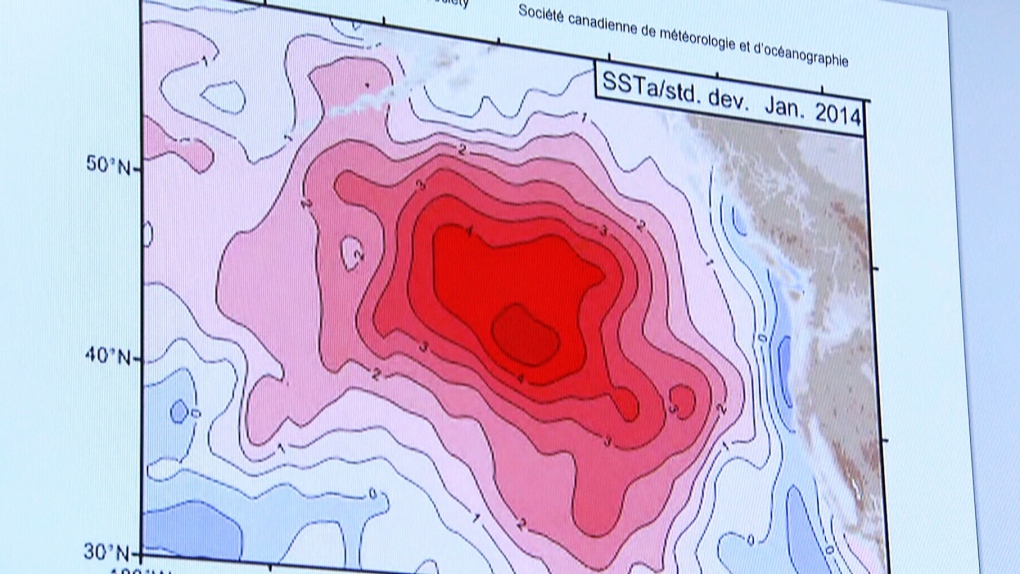 A thermal map shows a "blob" of warm water in the northeast Pacific Ocean.

On computer screens and in artist renderings, it was daunting: A massive red glow in the northeast Pacific Ocean above Vancouver Island, reaching up to the Gulf of Alaska.

What the computer renderings represented was an unprecedented temperature increase in the frigid Pacific, ominously nicknamed the blob.

According to scientists, the large patch of warm ocean water that helped cause a massive bloom of toxic algae in the Pacific has diminished for now, but they say it could be part of a new and troubling norm.

“It was really quite extraordinary in terms of the heat content is concerned,” said Ocean Networks Canada associate director of science Richard Dewey. “Three degrees is a massive ocean anomaly.”

According to climate scientists, the rare ocean warming began in late 2013 and didn’t release its grip until more normal winter storms broke it apart in the fall of last year.

Since the rare oceanic event began, researchers tracked its impacts and other rare weather occurring at the same time. Early indications show the warming trend in the northern Pacific coincided with Californian droughts, unusually cold winters in normally hot southern U.S. states and massive dumps of snow along the eastern seaboard.

“This weather pattern we saw in the past few years, we really haven’t seen anything like it in the past,” Dewey said in an interview with CTV Vancouver Island. “And it may in fact be a precursor of what we should expect in the future.”

The glowing red hue is now erased from digital maps, but researchers say there is still something to fear.

New and unfinished research is connecting the blob’s existence to worsening climate change in the fragile Arctic.

“It seems to be the place on the planet where we are seeing the most rapid change in climate and change in sea ice,” said Dewey. “And that is starting to affect our weather.”

Ocean Networks Canada just completed a 16-stop tour of Canada discussing the warm water blob and collecting data on what weather impacts it may have had.

Dewey said his research, along with other experts’ work, will continue to shed light on the rare weather anomaly.