A young woman is in critical condition following a hit-and-run crash in Saanich early Monday.

Police say a blue Dodge Caravan van struck a grey Yamaha scooter and a grey Honda Civic in the 1800-block of McKenzie Avenue, near Larchwood Drive, just before 7 a.m.

Both vehicles struck were heading westbound on McKenzie Avenue.

Police say the 25-year-old driver of the van proceeded eastbound, hitting several parked vehicles and eventually a telephone pole before fleeing on foot down Larchwood Drive onto Teakwood Road.

Police caught and arrested the van driver, who is being investigated for impaired driving.

The 20-year-old woman on the scooter was taken to hospital in critical condition, while the Honda driver suffered only minor injuries and did ot require hospitalization.

Collision analysts remained at the scene Monday morning and traffic delays in the area are to be expected. 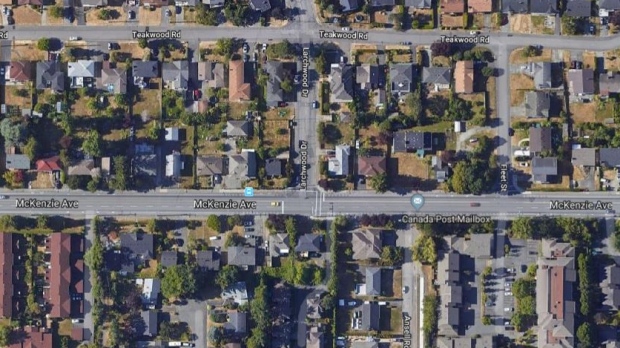