Medical marijuana dispensaries in Nanaimo have been slapped with a police order to cease operations within seven days.

The owner of Island Medical Solutions shared a letter sent to the business, detailing how it must end sales of marijuana and related products.

“I am notifying you that you have seven calendar days to comply with this notice or you will be subject to police enforcement including the arrest of all employees and patrons on site and the seizure of all offence related property from the premises,” the letter from Nanaimo RCMP says.

All 10 pot dispensaries in city limits received the notice. It’s believed to be the first time a city-wide cease-and-desist order has been issued to dispensaries.

Owners and employees of the shops held a meeting Thursday night to discuss their next steps.

“We’re going to consider the legal implications of it as well as the implications to the society. We just don’t want to leave any of our patients hanging with no place to get medicine,” said Richard Scott, manager of Nature Source Society Dispensary. “

Meanwhile, workers said they were afraid they might be out of a job in a week.

“It’s a tidal wave. I’m not on social assistance, this is my community. Everything that I love is in this community. I work here for a full-time job and I provide products that help pay my rent,” said Nature Source employee Ian Cooper. “Without places like this being here, there isn’t an economy for me and for a lot of the employees here. This is life-changing for us.”

Nanaimo RCMP said they’ll issue more details sometime next week, but said they’ve obtained evidence that each store is guilty of drug trafficking – either by selling to minors or unlicensed marijuana users.

While selling pot over the counter is considered illegal in Canada, some municipal governments like Vancouver have chosen to regulate dispensaries instead of shutting them down.

At a recent meeting of the Union of B.C. Municipalities, cities voted in favour of a resolution to declare they have the authority to licence dispensaries.

Prime Minister Justin Trudeau made a campaign pledge to legalize marijuana in Canada, but has yet to begin what most expect will be a lengthy regulation process.

Victoria Police told CTV News Thursday they had no plans to issue cease-and-desist orders to dispensaries in that city. 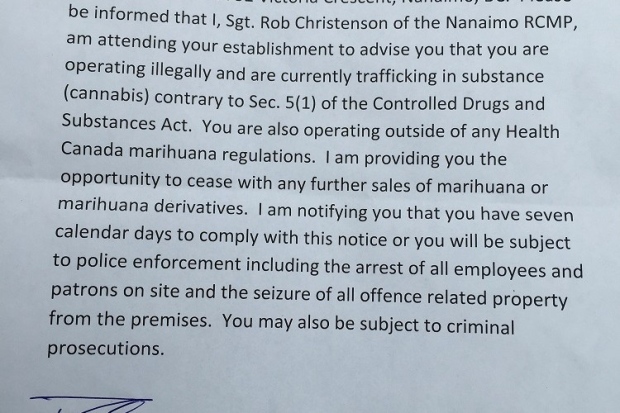