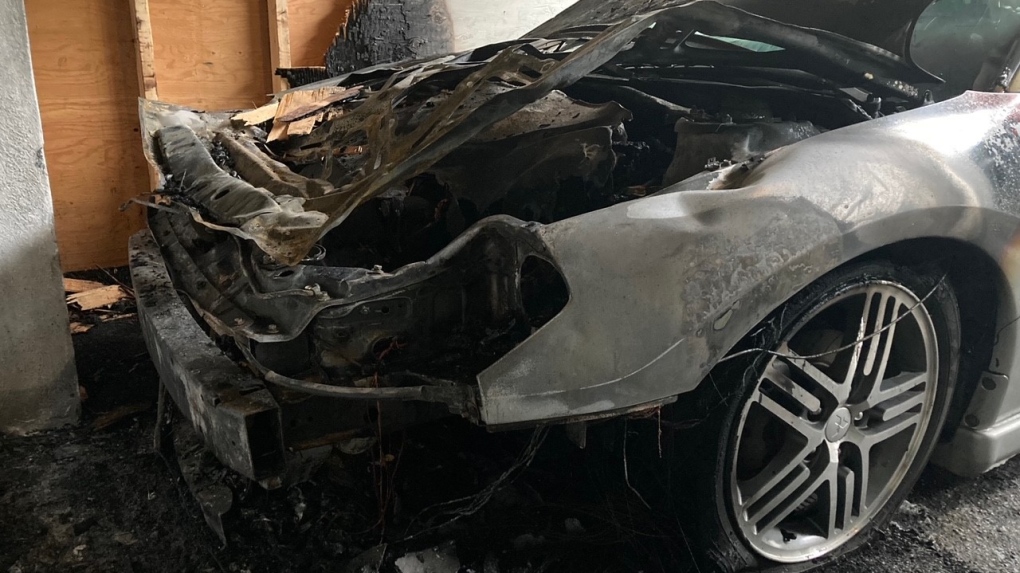 A vehicle damaged in the first suspicious fire in the 800-block of Academy Close is shown: (CTV News)
Victoria -

Victoria police have confirmed that a string of fires were deliberately set on Tuesday.

The first suspicious fire was reported just before 3 a.m. at a residential building in the 800-block of Academy Close in James Bay.

The fire, set in a parking area of the building, damaged two vehicles, exterior walls, and the floor of a residential suite above the parking lot.

Around the same time, police say another person called 911 after they spotted a small fire in the parking structure of a multi-unit residential building in the 900-block of Humboldt Street.

"Patrol officers attended and located evidence of a small, deliberately set fire that had failed to fully ignite," said VicPD in a release Wednesday.

Hours later, just before 7:30 a.m., the Victoria Fire Department was called to a fire at a similar parking area of a building in the 100-block of Douglas Street. The fire damaged some exterior walls of the structure before it was extinguished, according to police.

The last suspicious fire was reported around 1 p.m. at another multi-unit residential building in the 100-block of Douglas Street. The fire failed to ignite, police say.

None of the fires caused any injuries, according to VicPD.

The incidents are under investigation, and police are looking for any dashcam footage or surveillance video of any of these areas between 1 a.m. and 1 p.m. Tuesday.