‘May you never have to go through the same thing': Victoria veteran shares story of WW2

VICTORIA -- At 95 years old, a faded memory of your teenage years wouldn’t just be forgivable, it would be expected. But for Victoria veteran Gnr. Robert Dennett, his recollections of the Second World War remain vivid and at times shockingly raw.

At the ripe age of 16, Dennett, then living in Winnipeg, joined the Canadian Army. Upon completion of his basic training, the young man searching for adventure would be assigned to the 4th Canadian Armoured Division.

Given the rank of gunner, Dennett would be shipped overseas. Roughly three weeks after the D-Day invasion in Normandy, the young Canadian would get his first taste of action.

"Can you imagine trying to get across a canal when the guys on the other side aren't so friendly, and they are dug in?" Dennett tells CTV News Vancouver Island as he recounted his 11 months and numerous battles in Europe.

Bouncing from France to Holland and eventually into Germany, Dennett still recalls the horrendous sights and sounds of war, and the friends he lost.

"They faced that murderous fire day after day. How I never got hurt I don't know."

Inside his Victoria condominium, the now 95-year-old says he suffered some injuries but was able to traverse multiple war torn countries and dozens of battles without a serious physical injury.

He does say, however, that like so many Canadian soldiers past and present, he was wounded by his time at war.

"They call it PTSD today, but back in the Second World War it was called battle fatigue,” Dennett says after dragging his hands across his face. “Same thing, never goes away." 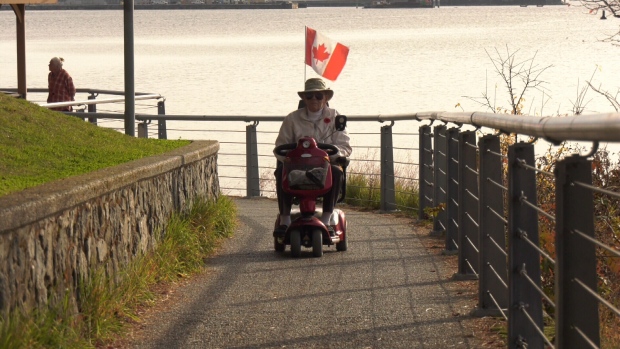 The grandfather, who lives alone, says he rarely if ever speaks of his time in the war. Friends, like Eva Craycroft, whom he goes to the Esquimalt gym with several times a week, have never heard of his service or sacrifice.

"How in the world can a young man survive all that?” Craycroft says after hearing Dennett’s story. “All those soldiers were so young, yet they fought for our freedom."

Each year Dennett quietly attends the Esquimalt Remembrance Day ceremony. The veteran doesn’t want attention or praise, but does hope Canadians take time to shake a veteran's hand this Nov. 11.

When asked what his message would be to Canadians on Remembrance Day, he says without hesitation: "May you never have to go through the same thing. God help you if you do."