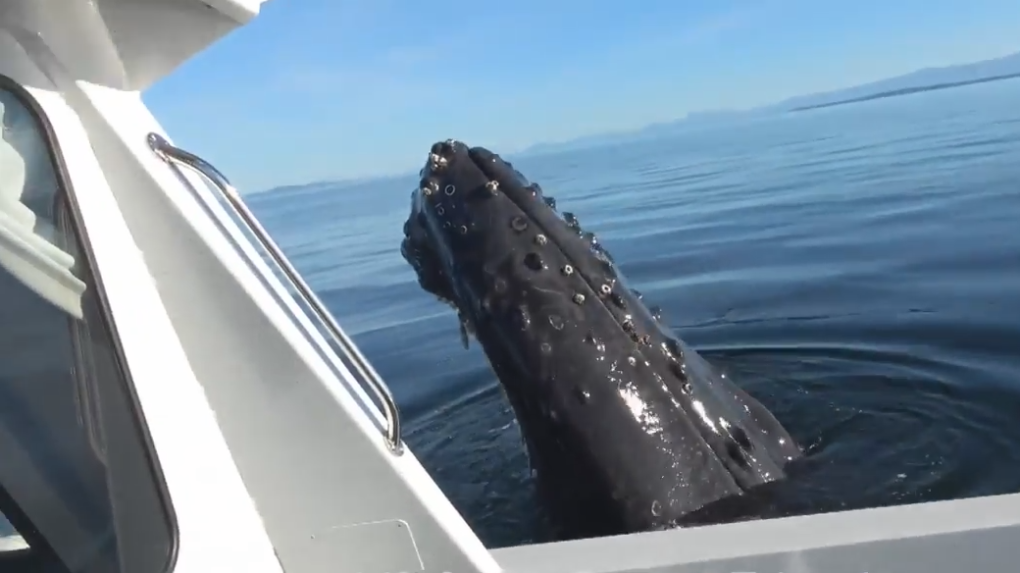 COMOX, B.C. - Two humpback whales that circled a boat in the waters off Comox, B.C., were a curious sight - until one of them got too close and cracked a window on the vessel with a bang of its head.

Peter Hamilton, director of the animal-rights group Lifeforce, was on the boat last Thursday and said the experience with the bus-sized whales was a bit unsettling.

He posted a video of the close encounter on YouTube, and it shows the whales near the boat before one of them leaps into the air and smacks its head on the window as it lands back in the water.

The video also shows one of the humpbacks flapping its flipper on the boat, rocking the vessel slightly.

“I shut the engine off to get a look at this rare gift of nature and there were some different behaviours that I witnessed,” said Hamilton, who has been studying the behaviour and travel patterns of humpbacks and orcas on Vancouver Island for the last three years.

“Humpbacks are known to check out boats and boaters because it's like 'What are these weird floating objects and species?' So they're checking us out as we're watching them, probably.”

Hamilton said the whales hung around for about 20 minutes before they moved away and he turned on the engine and slowly left the area.

It was the 10th time he'd observed the so-called “mugging” behaviour of humpbacks, Hamilton said, adding the whales often travel in pairs though have been seen in groups of five to seven.

A trio of humpbacks wandered near his boat last year and appeared to be having a good time, he said of the whales whose distinct broad tails, called flukes, arc out from the water.

“First there were two, and a third came over and it was like they started socializing with each other, doing all their rubbing and peck slaps on the water. I'm thinking, 'Hey, whales. I'm in the middle of this. You may want to socialize away from the boat.' But even then they didn't touch the boat.”

One lone young humpback he spotted in the distance last year had a cut down to its spine and big bumps on the underside of its tail, possibly from getting itself tangled in fishing gear such as nets and ropes, Hamilton said.

Canada's marine regulations require boaters to stay at least 100 metres away from humpbacks.

Hamilton said he keeps an even bigger buffer between his vessel and the animals that nearly went extinct before commercial hunting was banned in the 1950s.

The whales, known as loud singers of the sea, are found on both the East and West coasts of Canada and belong to separate populations: the West North Atlantic humpbacks, extending north to Labrador, and the North Pacific humpbacks, along the west coast of British Columbia to northwest Alaska.

The Department of Fisheries and Oceans says the most recent population estimate for the North Pacific whales, based on data from 2004 to 2006, was 18,302, a dramatic increase from previous estimates of 6,000 individuals.