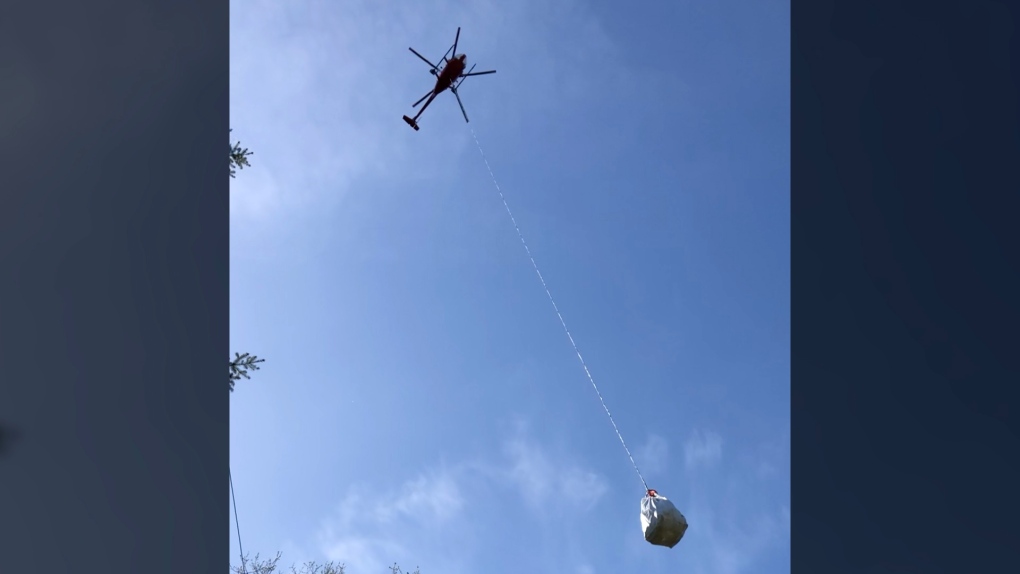 A helicopter was used to clean up several tonnes of garbage from a popular hiking area near Parksville. (Submitted)

A helicopter was needed along with some 40 volunteers to clean up a notorious illegal dump site on the mid-island over the weekend.

“It’s a real blotch on the environment,” said Bill Rawlins, President of the Parksville Rotary AM Club. “It’s lasted for decades, people been coming up here.”

For decades, people have been driving up to the top of Little Mountain in Parksville and have thrown garbage over the edge.

“Anything you can think of has gone over the bank,” said Rawlins. “People would say everything except the kitchen sink. We even found a kitchen sink.”

Kestrel Helicopters in Parksville hauled out 42 industrial sized fertilizer bags filled with garbage and used cargo nets to bring out larger items included a shell from a Volkswagen.

The garbage was dropped at a sorting station where volunteers would sort out what could be salvaged, and what went to the landfill.

Rawlins says approximately six to seven tonnes of garbage was removed from the base of the mountain.

“This project is going to hopefully help to discourage folks who in the past have been inclined to do something as ignorant as this,” said Rawlins.

A similar project was done in 2009 when three-and-a-half tonnes was removed by helicopter.

Several businesses and community members volunteered their time and equipment to make the project become a reality.

The Rotary Club is planning another cleanup in the fall to remove more garbage from Little Mountain.