Hairless cat becomes furless fashionisto with outfit for every occasion

ESQUIMALT - Imogen is sitting on the couch reading to her roommate, who's sitting on her lap. He's a hairless cat named Morbo Fishpaw.

"Morbo's kind of my best friend," Imogen says with a smile. "He's the little man of the house, if you will."

Imogen met the Canadian Sphynx about four years ago, when she was looking for a hypo-allergenic pet. Imogen shows me pictures of Morbo as a kitten; what he lacked in hair, he made up for in wrinkles.

Imogen says Morbo was the only kitten in the litter that approached her and stayed with her. "I'm very honoured that he made the selection he did."

Ever since then, the dynamic duo have gone almost everywhere together. Morbo sits in a front-facing baby carrier while Imogen runs errands and attends appointments. "Cats can be as outgoing as dogs," Imogen says. "They can follow the same routines."

Because Morbo lacks hair, he requires UV protection when they're walking outside. "It's either sunblock or clothing," Imogen says with a laugh. "And he has a fantastic wardrobe." 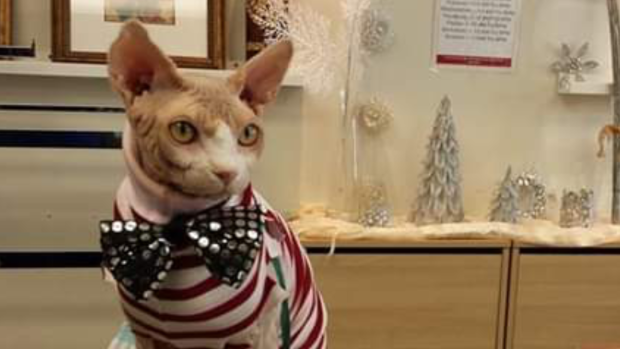 Morbo Fishpaw is a furless fashionisto, and Imogen has the photos to prove it. They show Morbo in outfits curated from thrift store baby sections and modified for every occasion.

"He has an assortment of wigs, hats, T-shirts," Imogen says. There's also photo of the cat wearing berets, bowties, and sunglasses. "He has stylish and stunning jackets," Imogen says proudly. Plus, there's his formal wear, festive wear, and beach wear.

"For winter, he has mittens and a snow suit."

Morbo Fishpaw also wears Christmas outfits to get his picture taken with Santa. "I sneak him into the mall," Imogen admits. "Santa love seeing him!" 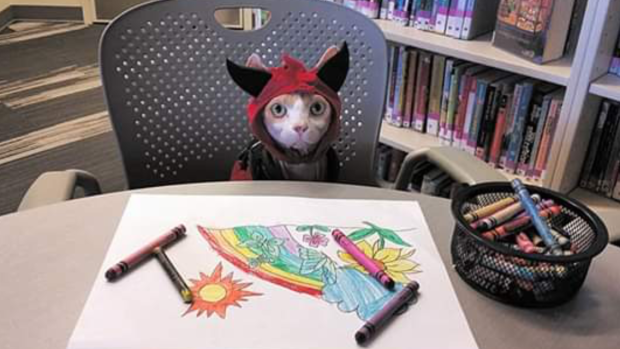 Strangers love meeting Morbo Fishpaw too. While I was trying to get footage of Imogen and Morbo walking down the street, people kept stopping them to meet the cat in the sunhat. "It's just fabulous," says one woman with a big smile. "He's a really friendly, social, little guy," Imogen responds proudly.

Morbo is so friendly that Imogen says she tried to enroll him in an animal therapy program. When the cat didn't meet the requirements, Imogen says they started connecting directly with people in need through Morbo's Facebook page.

"[People] that have health issues in a variety of ways." Imogen explains. "There are a couple disabled people that he corresponds with, with a certain regularity."

Imogen says Morbo inspires joy and laughter in the people he connects with.

Beyond the superficial fashion, Imogen says, Morbo Fishpaw is capable of substantial feeling. "Ultimately their ability to love unconditionally is tremendous," she says. "It's absolutely phenomenal.

And for that, Imogen couldn't be more grateful. "He's just been an amazing little creature to live with," she says with a smile. Then she finishes reading to Morbo, followed by a kiss on his hairless head and a whisper in his ear, "You're mommy's little cuddle bug." 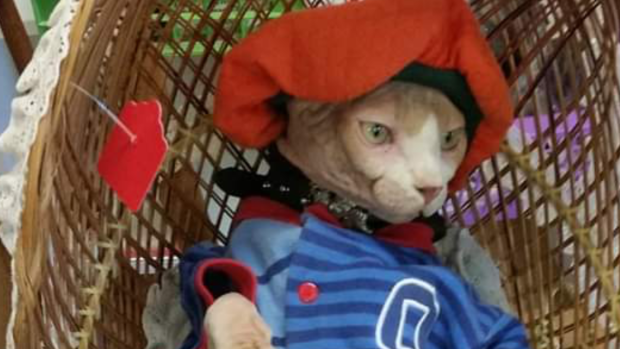