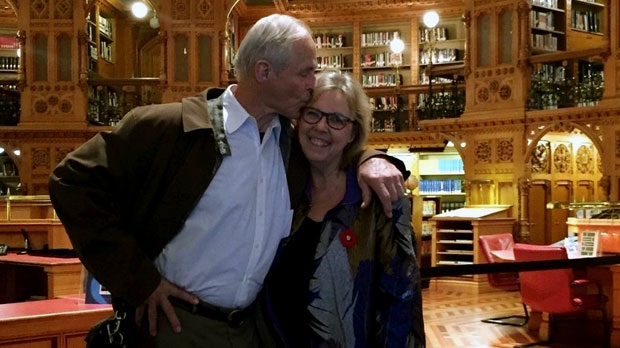 VICTORIA - Green party Leader Elizabeth May is engaged and is making plans for a wedding next spring.

May said Monday she and John Kidder will be married in Victoria on April 22 and are planning a train trip from Vancouver to Ottawa shortly afterwards as their honeymoon.

She said the couple have known each other for about five years, but the sparks flew at a Green Party convention in Vancouver in September.

Kidder, who is from Ashcroft, B.C., popped the question about a month later.

Kidder, 71, has deep roots in the Green party, running federally for a seat in B.C. and is a founder of the provincial party.

May says he is a retired technology entrepreneur who operates a hops farm in Ashcroft, but also spends time in Vancouver.

We have a very special announcement.

Our fearless Leader, @ElizabethMay, is engaged to be married! Congratulations to her and her lucky partner, John Kidder!" We're so happy for you both. pic.twitter.com/a83zjXcSRc