A lengthy standoff between a slithering escapee and city staff in Victoria ended in an impasse Thursday, but crews hoped bait laid out overnight would still help them catch the creature.

It started Wednesday night when a technician investigating a sinkhole stuck a camera down a storm drain near Quadra and Mason streets – only to discover a massive snake.

Mike Ippen, Victoria’s manager of utility operations, said the snake had travelled about four metres into the run of the pipe.

“They figure it’s either a boa or a python and probably about four to six feet long,” Ippen told CFAX 1070 Wednesday night. But as of Thursday, crews believed it to be a very large and non-lethal corn snake.

The city contacted animal control, who tried to coax the sneaky snake out with some bait – but with no luck.

They have no idea how long the animal has been there, and believe it could be an escaped pet that got into a catch basin.

The snake is contained and there is no risk to the public, Ippen said.

“There are no other access points except the manholes, so we have sealed it in the system until animal control figures out how to remove the snake without hurting it,” he said.

Bait has been laid out for the animal, and crews called it quits on the operation at around 3 p.m. Thursday to wait for the snake to take it.

If that doesn't work, crews may have to excavate the street as a last resort.

Anyone missing a pet snake is asked to call the city’s animal control department at 250-414-0233. 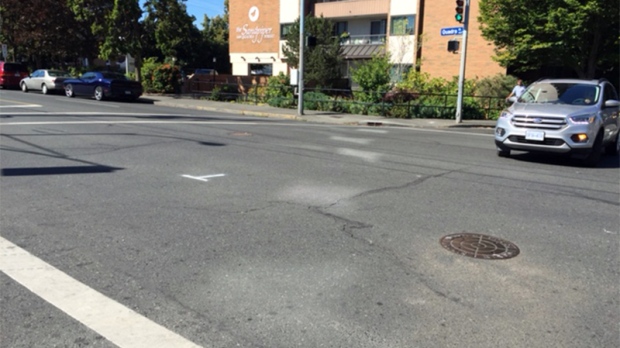 'T' marks the snake: Victoria city staff say a boa or python up to six feet long refuses to move from a storm drain near Quadra and Mason streets. Aug. 18, 2016. (CTV Vancouver Island)