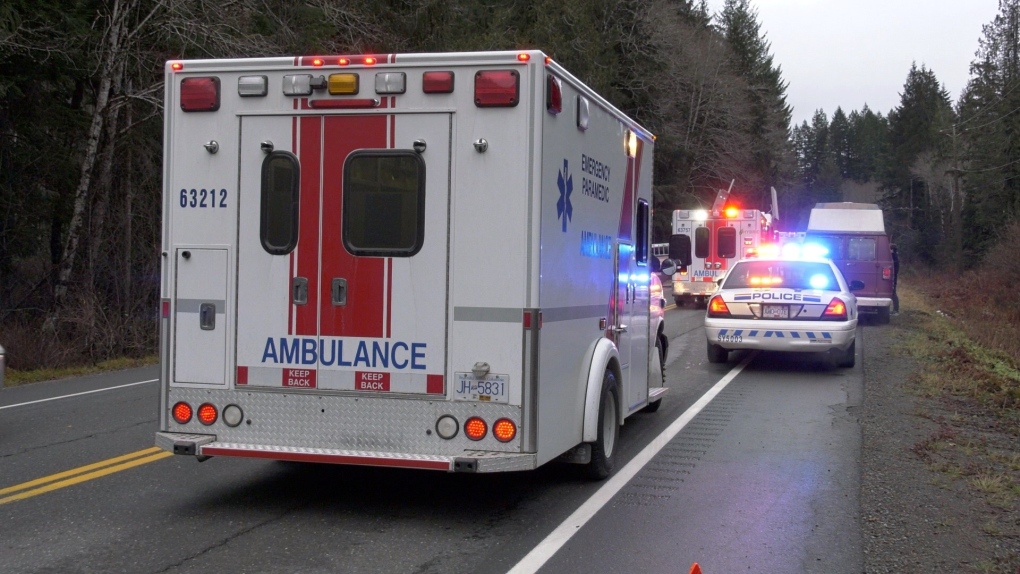 Two young fundraisers involved in a charitable run down the length of Vancouver Island unexpectedly found themselves at the centre of a crash scene north of Campbell River Wednesday afternoon. (CTV)

ROBERTS LAKE, B.C. -- Two young fundraisers involved in a charitable run down the length of Vancouver Island unexpectedly found themselves at the centre of a crash scene north of Campbell River Wednesday afternoon.

Jack Amos and Joe Robertson were on day four of their trek from Port Hardy to Victoria to raise funds for the 1Up Single Parent Resource Centre when their support van was struck by another vehicle.

"I was running and I turned the corner coming up the road and I just saw a bunch of vehicles parked on the side,” says Robertson. “I had no clue what was happening and I came into the scene."

It turned out that the support vehicle, which Amos was driving, was struck by a southbound pickup truck attempting to pass.

"I slowed down, I indicated and I turned,” Amos says. “Unfortunately, I guess it was at the same time the truck was trying to pass me. I hit them. They went off into the ditch."

Amos and a documentary videographer who was riding with him jumped out of the vehicle to come to the assistance of the three occupants of the truck that had gone over an embankment and into a tree.

"The first thought was get everyone out of the vehicle in case there was a fuel leak or something,” Amos says. “We got, I think, the son and the mom out of it, and then the grandmother, she had taken the brunt of it, so we left her in."

Firefighters from Campbell River along with three ambulances arrived at the scene to take the occupants to hospital.

The crash happened halfway between Campbell River and Sayward around 3:30 p.m. and the incident has brought the fundraising to an unexpected delay.

"We're just trying to help some people and I guess accidents happen and it feels truly awful, just being involved in this thing," Amos says.

The fundraising team put their run on hold for the rest of the afternoon and evening in order to regroup.

"We're going to take a night to relax, recover and then keep going," Robertson says.

The progress of the team can be found on the 1Up Single Parent Resource Centre Facebook page.