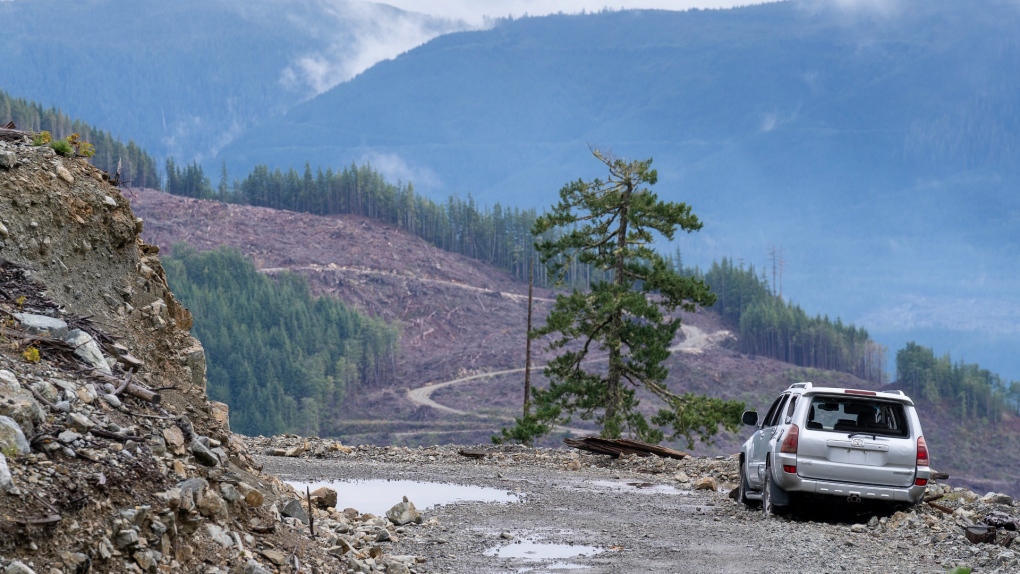 The remains of a cut block is seen in the background with a destroyed car in the foreground in the Fairy Creek logging area near Port Renfrew, B.C. Tuesday, Oct. 5, 2021. People who have declared themselves "land defenders" claim the vehicle was destroyed by the RCMP as they protested logging in the surrounding area. THE CANADIAN PRESS/Jonathan Hayward
Vancouver -

The RCMP had spent more than $3.7 million by Aug. 31 to enforce a court injunction against old-growth-logging opponents camped out in the Fairy Creek watershed on southern Vancouver Island.

The figure comes from an RCMP document obtained by Capital Daily through an access to information request and shared with CTV News Vancouver Island.

The vast majority of the cost came from just two line items: "personnel," which accounted for $2.4 million in expenses, and "transportation and telecommunications," which cost a little more than $940,000.

The rest of the RCMP's enforcement expenses came from "rentals and leases" (roughly $300,000), "utilities, materials and supplies" ($55,000) and "professional and special services ($7,600). The document does not elaborate on what falls into each of these categories.

Mounties have arrested more than 1,100 people - some of them multiple times - since they began enforcing an injunction against protesters in the watershed in mid-May.

The protesters themselves have been camped out since August 2020 in hopes of defending what they describe as the last unprotected area of old-growth forest on southern Vancouver Island against logging by Teal Cedar Products, Ltd.

The company sought an injunction to prevent the demonstrators from interfering with its operations, which the B.C. Supreme Court granted on April 1. In September, after several months of continued protests in defiance of the injunction, the court declined to extend it.

Supreme Court Justice Douglas Thompson cited the RCMP's behaviour when enforcing the injunction as a key factor in his decision.

Thompson said that while allowing the injunction to expire could cause significant harm to both Teal Cedar and to the rule of law, “methods of enforcement of the court’s order have led to serious and substantial infringement of civil liberties, including impairment of the freedom of the press to a marked degree.”

“Enforcement has been carried out by police officers rendered anonymous to the protesters, many of those police officers wearing ‘thin blue line’ badges,” Thompson added. “All of this has been done in the name of enforcing this court’s order, adding to the already substantial risk to the court’s reputation whenever an injunction pulls the court into this type of dispute between citizens and the government.”

Teal Cedar has appealed the decision, and in October the B.C. Court of Appeal reinstated the injunction on a temporary basis, pending the outcome of the appeal.

A three-judge panel heard arguments in the case last week, but reserved its judgment. No timeline was given for when a decision on the appeal will be issued.