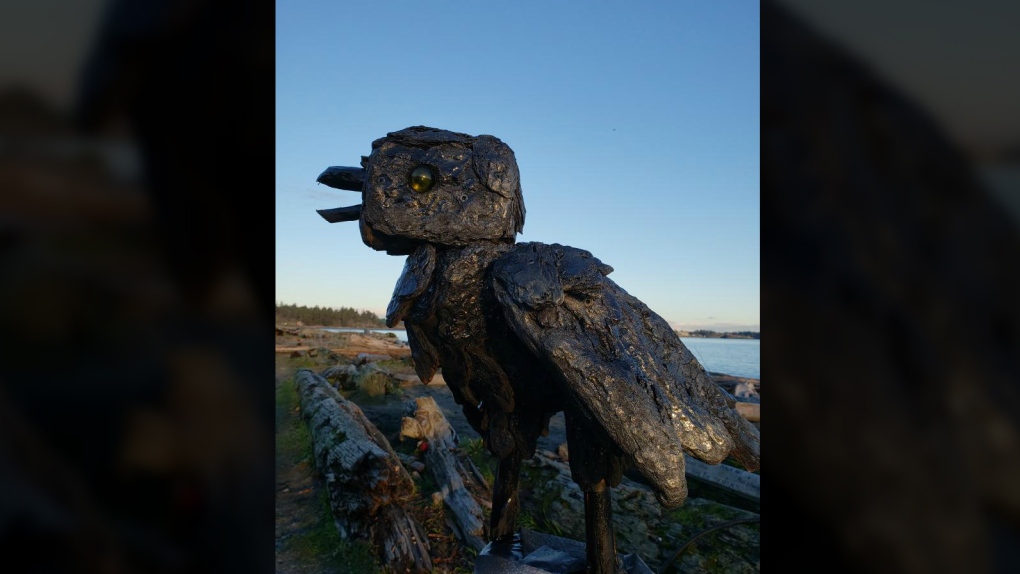 One of Paul Lewis' driftwood sculptures is shown on the shore of Esquimalt Lagoon.

So when a swan, even if it’s made of driftwood, gets decapitated, a high level of outrage is to be expected.

It’s possible supporters in Colwood are even more irate with the repetitive destruction of the bird sculptures at Esquimalt Lagoon than the artist himself.

Paul Lewis has been trying not to let the latest round of attacks ruffle his feathers, focusing instead on the support.

“The community really comes together when something happens to them,” said Lewis, referring to the 16 sculptures he originally created over a two-week period last April.

It took him about five hours to create each bird out of driftwood and bark salvaged from the beach.

Each time he went to the Esquimalt Lagoon, he would sculpt the first bird he saw when he got there.

It is a bird sanctuary, so the result is a diverse flock of fowls, ranging in both size and type.

The City of Colwood was happy to have them stay, and even started promoting the public art on its website.

But not everyone loves the sculptures, and Lewis has had to rebuild constantly due to people either stealing or breaking the birds.

“Around grad time the hummingbird, the oyster catcher and the baby in the nest were all stolen and the cormorant was smashed. Where the Steller's jay was, there used to be a turkey vulture there and he was stolen,” said Lewis.

He said every month at least one bird, if not more, falls victim to theft of vandalism.

In the last couple weeks Lewis has been harassed by an older man telling him he was going to take a baseball bat to the sculptures. When Lewis arrived at the beach on the weekend, and found the swan’s head had been torn off, there was a social media uproar.

A petition to make sure the culprit was caught and calling on the City of Colwood to back the birds’ safety has already been signed 3,000 times.

“We are asking all supporters of the sculptures could rally together and save them. I'm not a political person, just a bird lover, photographer wanting to help keep the sculptures. And ensure they are protected by the city,” wrote Allie Lima, who started the petition.

Amidst the furor, came a quiet confession. A 17 year old boy told Lewis it wasn’t the threatening man who had beheaded the beloved bird, but the boy and his friends.

The teenagers were playing around with Christmas hats and somehow tore off its head. With all the attention the birds were getting, they were too scared to bring it back.

A sweet end to just one of the birds’ stories, but it doesn’t change the ongoing problems with vandalism, thefts and threats.

Lewis has no idea whether the hatred is due to an extreme dislike of the sculptures themselves, or is meant as a personal attack.

“Maybe they’re jealous or you know maybe my criminal history in the past and now, you know I’ve come so far and turned my life around, maybe they don’t like that. Once a criminal always a criminal in their eyes maybe, who knows,” said Lewis.

A decade ago he committed a violent armed robbery to feed a cocaine addiction. Lewis came out of prison a changed man, and put his energy into art. Now his life is about creating beauty, which other people are trying to destroy.

But instead of getting rid of the sculptures, the publicity is only making their reputation grow.

“Whoever you are and whatever your reason is for wrecking them you are actually totally going against whatever you think you are doing. I am not going to back down and neither is the community,” said Lewis.

Between Lewis’ story and his endless rebuilding of the birds, it is almost impossible not to draw a comparison to Phoenix, the bird in Greek mythology which is born again, rising out of the ashes of its predecessor in a spectacular fashion. Lewis is determined each bird he remakes will be just as spectacular.

“I’m going to make a new one and it’s going to be even better than the last one.”