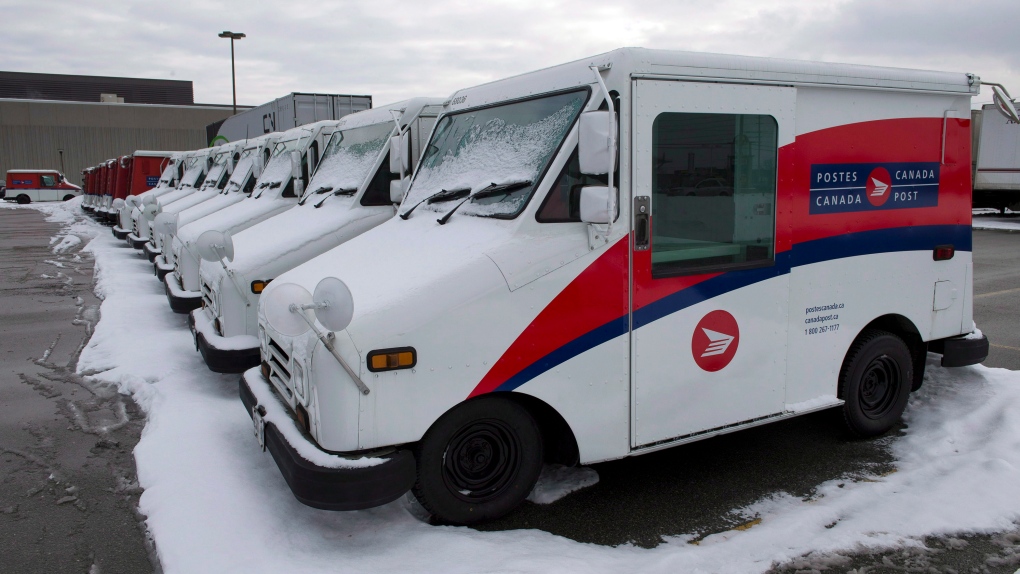 Canada Post trucks sit in a parking lot at the Gateway sorting facility in Mississauga, Ontario on Wednesday December 18, 2013. (THE CANADIAN PRESS/Frank Gunn)

Canada Post is warning of service disruptions in areas of Vancouver Island on Wednesday due to recent snowfall.

A red alert has been issued for the Nanaimo and Parksville areas, meaning all deliveries have been suspended as of Wednesday afternoon.

Canada Post says the red alert was issued because of snow and adverse weather.

Meanwhile, yellow alerts have been posted for several communities in central and southern Vancouver Island, including in Victoria.

A yellow alert means Canada Post will do its best to complete deliveries, though there may be delays.

Canada Post has also posted red and yellow alerts for other communities in B.C., including in Metro Vancouver and the Fraser Valley.

Snowfall and high winds on Tuesday played havoc on some Vancouver Island infrastructure, causing delays on roadways and knocking out power to thousands.

Canada announced that it had called China's ambassador onto the carpet as Ottawa and Washington expressed their disapproval Friday over a high-altitude balloon found to have been hovering over sensitive sites in the United States.

The federal Liberals are withdrawing an amendment to their guns bill that introduced a controversial new definition of an assault-style weapon. The amendment would have defined what kind of firearms should be banned in Canada and added dozens of new semi-automatic rifles and shotguns to the list.

Medicago Inc., the Quebec-based drug manufacturer of a Canadian COVID-19 vaccine and other plant-based drugs, is being shut down by parent company Mitsubishi Chemical Group.

A federal government department has fired 49 employees who received the Canada Emergency Response Benefit while they were employed.

Canada's newest millionaire, an 18-year-old university freshman from northern Ontario, has achieved a lot of firsts with a recent lottery win. Here is her story.

A Portuguese dog named Bobi has been named the world’s oldest living dog by Guinness World Records, which claims the pooch is also the oldest canine ever recorded.

A letter of support signed by 30 prominent Quebecers, including academics, activists, and community leaders, is asking that Amira Elghawaby be given the chance to fulfil her mandate as Canada's first special representative on combating Islamophobia.

Ukraine unveiled a criminal case on Friday against the boss of Russia's Wagner mercenary company, and promised to track down and prosecute the company's fighters who try to flee abroad.