How do you build a better bee?

That’s the question a group of scientists and beekeepers on Vancouver Island are attempting to answer as bee populations suffer mass die-offs around the world.

They've launched an ambitious four-year project to identify the finest genetic traits in the insects and then selectively breed them to create stronger ones.

“We’re trying to make a local, adapted resistant bee,” said master beekeeper Iain Glass, who’s helping spearhead the project. “The bees are very much in crisis and unfortunately a very large number of imported bees are brought in to Canada every years, tens of thousands of them.”

Glass said those imported bee populations attract diseases and mites, and death rates in some areas can be up to 75 per cent.

“If we continue to have to medicate the bees as we’re doing, we’re just going to see continued death rates. Every time some new pest or pathogen comes along, we have the risk for a complete wipeout,” he said.

He and others are turning to science to identify desired traits, and roughly a year into the project hives have already been identified for selective breeding.

One of those traits is what scientists call hygienic bee behaviour, which can be determined by using liquid nitrogen to freeze and kill a small section of a hive.

If worker bees clean out the ravaged area, it means they’re likely to clear out other pathogens that would otherwise be fatal to the hive, Glass said. 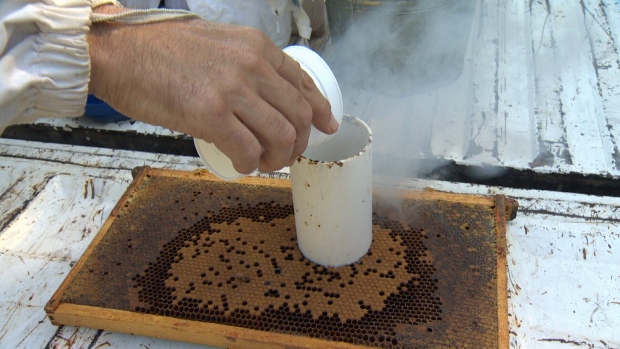 Another aspect of the project includes educating beekeepers up and down Vancouver Island on how to identify the best bee traits.

“If we really focus on breeding local genetics on Vancouver Island, any bees that we breed here are going to be far, far better in their genetics than those imported bees,” said Chelsea Abbott of the Cowichan Valley Hive Share.

“Imagine if each one of those bees is then pollenating a flower. It’s huge, that’s our food production right there.”

A recent American study found their numbers fell by about 23 per cent between 2008 and 2013.