VICTORIA -- The B.C. government says it's putting together an independent Old-Growth Technical Advisory Panel to guide the province's next steps in old-growth management.

Five people will make up the panel, which will use science and data to form its recommendations, particularly surrounding old-growth logging deferrals.

Each of the five members on the panel have decades of forest management or policy-making experience under their belts,

The five members include Garry Merkel, is an experienced forester and member of the Tahltan Nation in northwest B.C., Rachel F. Holt (PhD), an ecologist based in Nelson, Lisa Matthaus, provincial lead for environmental group Organizing for Change, Karen Price (PhD), an ecologist based near Smithers, and Dave Dust (M.Sc., RPF), a landscape analyst based near Smithers.

"We are committed to a science-based approach to old-growth management, and our work with the advisory panel will help us break down barriers between the different interpretations of data that are out there," she said.

Earlier this month, the province agreed to a two-year deferral of old-growth logging in the Fairy Creek and central Walbran valley areas of Vancouver Island, after it was requested by three local First Nations.

The province says there are currently 11 old-growth areas where logging has been deferred, including the two most recent deferrals.

Protesters in the Fairy Creek area, who are still manning blockades in the region, say they want old-growth logging to stop across the province in perpetuity.

Meanwhile, the province says it is still working on 14 old-growth management recommendations that were presented to B.C. in September 2020.

The province has committed to adopting all 14 of the recommendations, and recently laid out a rough timeline for when the measures will be addressed, which can be found below. 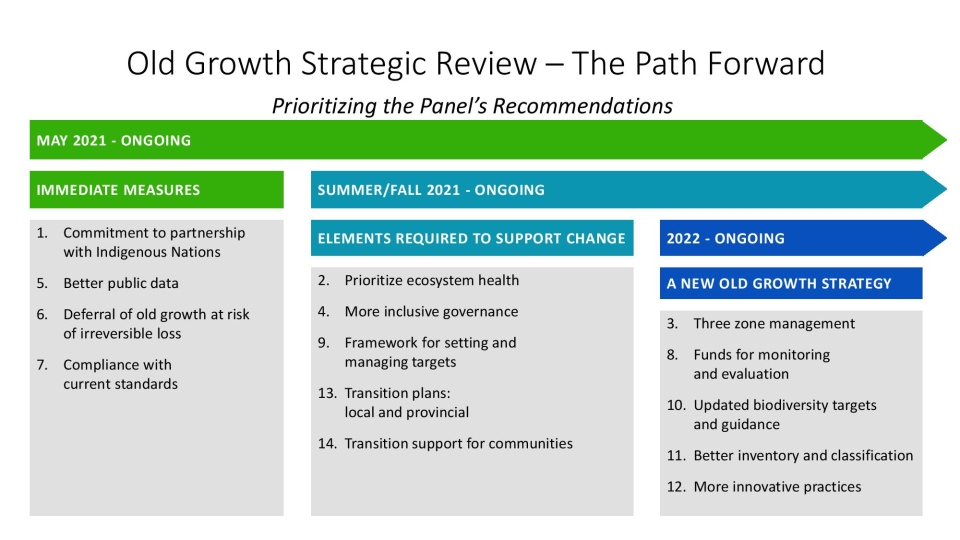