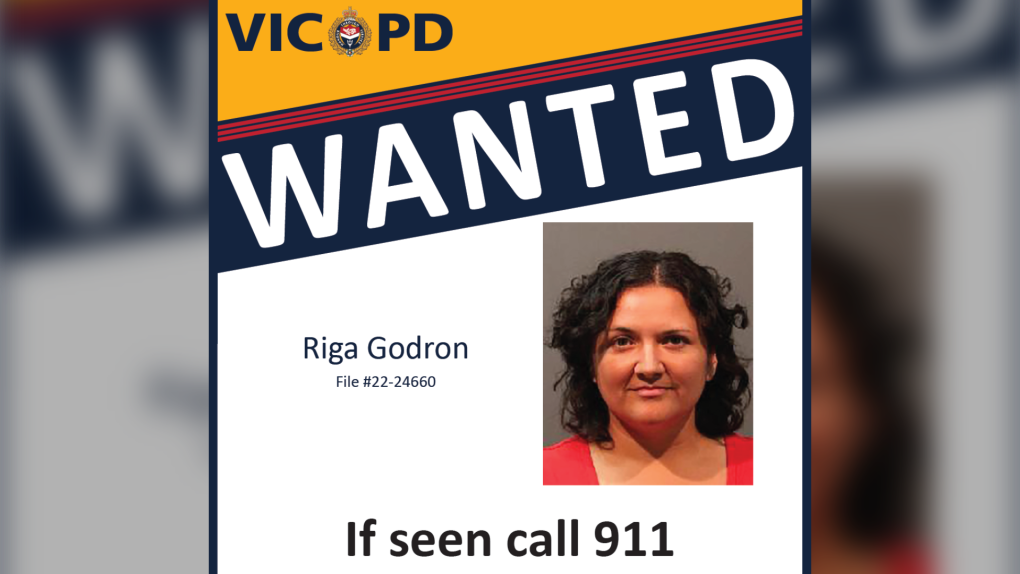 Riga Godron, 44, is charged with obstructing a police officer, flight from police and driving without due care and attention. (VicPD)

A woman charged with multiple crimes stemming from a traffic incident in Victoria on Canada Day is now wanted province-wide, and police are asking the public for help locating her.

Riga Godron, 44, is charged with obstructing a police officer, flight from police and driving without due care and attention.

Police allege that she was behind the wheel of a vehicle that refused to stop for officers on July 1, forcing officers to "leap out of the way" to avoid being hit.

The vehicle fled the scene and was boxed in by police in the 600-block of Pandora Avenue not far from Canada Day celebrations, police said, adding that the driver was pulled from the vehicle and arrested.

The charges against Godron have not been proven in court.

Police describe Godron as a 44-year-old white woman who stands five feet tall and has a medium build. She has black hair and green eyes.

Anyone who sees Godron is asked not to approach her, but to call 911, police said. Those who have information on her whereabouts are asked to call the Victoria Police Department's report desk or contact Crime Stoppers to remain anonymous.

One of the declared candidates for city council in Victoria's upcoming municipal election is named Riga Godron. It was unclear Wednesday night whether the candidate is the same person police are seeking.

CTV News reached out to Victoria police in hopes of clarifying this point, and received the following response from VicPD spokesperson Bowen Osoko:

"I want to be clear that the timing of the community update has no relation to the municipal election. Godron failed to attend court for her charges stemming from the July 1 incident and a warrant was issued for her arrest."