On West Vancouver Island, between 100 to 150 millimetres of rain is expected to fall between Wednesday night and Thursday afternoon.

Strong winds are also expected during this time, according to Environment Canada, though no wind warning has been issued for the area as of Tuesday.

"Localized flooding in low-lying areas is possible," said Environment Canada. "Avoid driving through water on roads. Even shallow, fast-moving water across a road can sweep a vehicle or a person away."

WARNINGS POSTED FOR OTHER REGIONS

Between 50 and 100 millimetres of rain is expected to fall in North Vancouver Island starting Wednesday afternoon through Thursday afternoon.

The rain will be particularly heavy in the Port Alice area, according to the weather agency.

Strong winds of roughly 90 km/h are also expected to blow through the island's north coast Wednesday.

"Damage to buildings, such as to roof shingles and windows, may occur. Loose objects may be tossed by the wind and cause injury or damage," added the weather agency.

A wind warning was also issued for East Vancouver Island on Wednesday.

Southeasterly winds between 70 km/h and 90 km/h are expected to begin around midnight Wednesday until early Thursday morning.

The warning effects communities from Courtenay to Campbell River, and from Nanoose Bay to Fanny Bay.

Environment Canada encourages residents to stay tuned to its website for the latest updates. 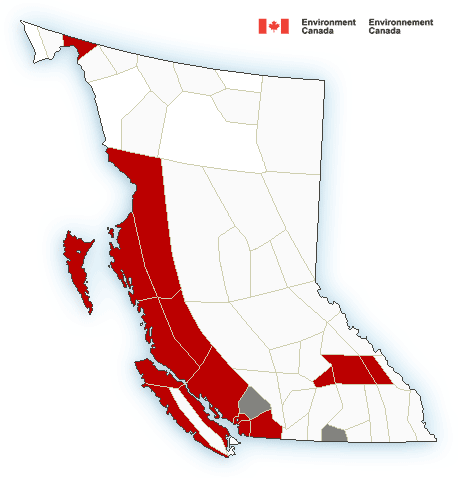