Throughout the pandemic, many people started working from home, and in the process decided to get a pet. Now, many are returning to the office, and with that animals are once again being surrendered to shelters.

Eight new puppies have just arrived at the Victoria Humane Society in Saanich from a remote community in British Columbia.

"We’re seeing a lot of puppies, kittens, adults dogs, that normally we wouldn’t have seen before because we would have spayed and neutered," said Penny Stone, executive director of the Victoria Humane Society.

Many remote communities have been closed to outsiders due to COVID-19. Because of that, the Victoria Humane Society hasn’t been able to get into those communities to run its neutering programs.

That program controls the animal population in those remote communities. 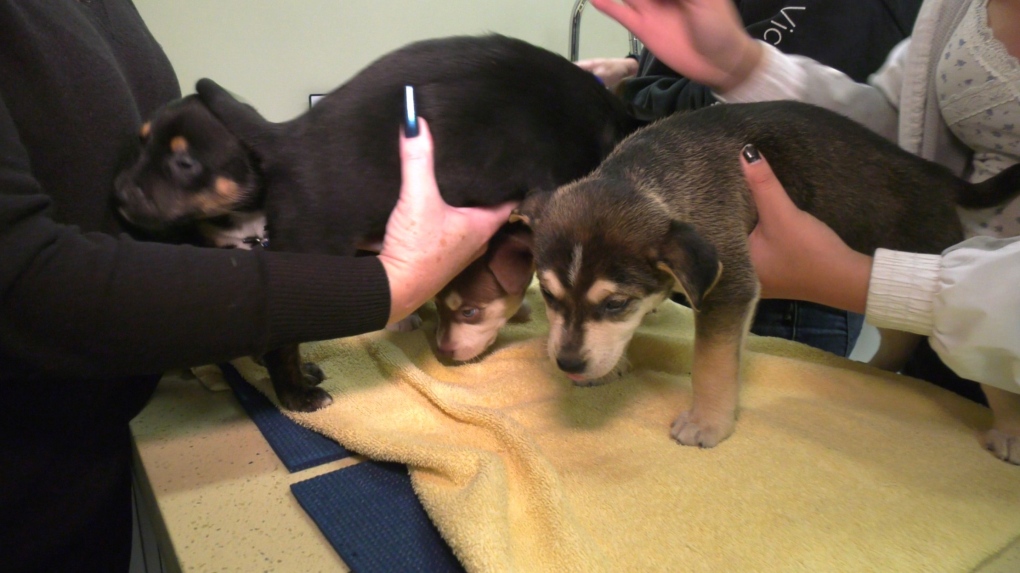 Eight new puppies have just arrived at the Victoria Humane Society from a remote community in B.C.: Nov. 10, 2021 (CTV News)

"I would say we’re probably set back 10 years in where we were before (pre-pandemic) because it’s just blown up," said Stone.

The Humane Society is at 100 per cent capacity due to many people returning unwanted pets that were adopted during the pandemic and because of it's suspended neutering programs in those remote communities.

It’s currently housing 100 dogs and puppies and almost 300 cats and kittens. The animals are spread out throughout 350 foster families.

"Over the last few months we’ve had a lot of people contacting us to surrender, specifically with the excuse that they are going back to work and they don’t have time," said Amy McLaughlin, founder and operator of Amy’s Bunny Barn.

Amy’s Bunny Barn in Sooke is full. They have 56 bunnies in care and more than 20 on the waitlist.

"Bunnies are more abandoned than cats and dogs," said McLaughlin.

The big problem that McLaughlin is seeing now is that people are just abandoning their rabbits in parking lots around the Capital Region.

"Which is leading to colonies of rabbits because they have litters every 30 days," said McLaughlin.

Rehousing dogs and cats can be easier than rabbits, but you could imagine the challenges around rehousing a horse.

That’s a problem that the Humanity for Horses Foundation in Duncan, B.C. is now faced with.

"Feed costs are skyrocketing," said Rebecca Sanesh, owner of the Humanity for Horses Foundation. "One, because of the drought, and two because of COVID.”

The rescue operation has 28 horses on its Duncan property. With the rising costs of shipping and hay, as well as some horse owners in Alberta who have lost their jobs, many have decided that they can no longer afford to own their horses.

Back at the Victoria Humane Society, those eight puppies are a few of the lucky one as there was room for them at the inn. Stone worries that many other unwanted animals could be falling through the cracks.

"We’re at capacity and the reality is, what happens to them when we can’t take them?"

The 18-year-old gunman who killed 21 people at a Texas elementary school walked in unimpeded through an apparently unlocked door, a law enforcement official said Thursday. The gunman was apparently inside the building for at least three-quarters of an hour before U.S. Border Patrol agents stormed a classroom and killed him.

Multiple Toronto schools were in lockdown after a male was shot near an elementary school in Scarborough’s Port Union area on Thursday afternoon, first responders and an eyewitness said.

Quebec ready to vaccinate against monkeypox as soon as Friday, with 25 confirmed cases

Quebec says it is ready to vaccinate people who have come into close contact with monkeypox as soon as Friday.

Health experts say that the monkeypox virus isn’t likely to have a similar impact to SARS-CoV-2, mainly because it isn’t a new virus and doesn’t spread the same way.