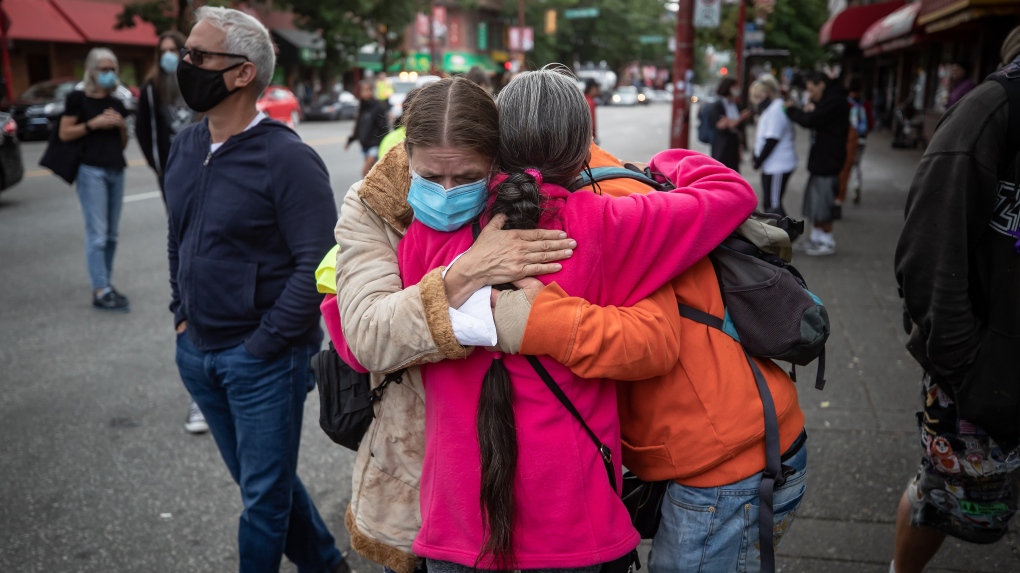 A large group of people gathered in downtown Campbell River, B.C., with heads bowed while garlands of small, coloured flags bearing the names of loved ones lost to poisoned street drugs fluttered in the breeze behind them.

Folks then donned a set of headphones before setting out for a narrated walk through the city - an excursion designed to grow empathy for people impacted by substance use, homelessness and Canada's toxic drug crisis.

An experiential, arts-based community action project in the Comox Valley and Campbell River, Walk With Me shares recorded real-life stories of people caught up in the scale and suffering of the ever-worsening public health emergency, now entering its seventh year in British Columbia.

Walk participants navigate the streets while listening to folks with lived experience, family members and front-line workers share moments of grief, despair, resiliency and courage as a means to tackle the stigma associated with substance use and provoke understanding and policy change.

“Downtown Vancouver and Victoria seem to be the epicentres of where the toxic drug poisoning crisis is unfolding, and very little attention is paid to rural and remote communities,” Karsten said, adding five people associated with the project have died due to poisoned street drugs.

“We all know that this crisis has a huge impact in our communities, and we wanted to know what we could do to make change,” she said.

In the Campbell River area alone, 25 people died from toxic street drugs in 2021, and 14 more have died in the first three months of this year across the North Island health region while, across Canada, a minimum of 27,000 people have died since 2016.

To date in 2022, 74 per cent of dead were aged 30 to 59 - and 77 per cent of them were male, the BC Coroners Service reports. And while First Nations people make up little more than four per cent of the population in the Vancouver Island region, they represent 15 per cent of the fatalities.

But it's important to see every individual as a human being with a different story to tell that may involve trauma, the legacy of colonialism or domestic violence, he said.

“Society has forced people into this way, it's not just the result of an individual choice to get high,” Decaire said.

In some instances, respected elders and leaders from his village have ended up on the streets of Campbell River, he said, and all merit the same respect they have always had due.

Before setting off on the audio journey, he reminded students, and other participants with personal experience with the toxic drug crisis, to rely on the individuals at the event to help process triggers or emotions that might arise.

Then, for 40 minutes, the participants immersed themselves in other people's people's experiences as they moved through the downtown core, carefully shepherded through intersections and around obstacles by the event's safety handlers.

In the recordings, front-line workers speak of their grief and rage at preventable deaths - the result of inadequate government response to the raging health crisis. But there are also examples of courage and community that people struggling with substance use offer to one another.

One man, injured on the job, describes getting hooked on opiates during medical treatment and the loneliness and isolation he felt during the spiral into addiction. But he also speaks of the insights and supports he needed to get sober.

Others talked of trauma or family violence that pushed them onto the streets and drug use at a vulnerable age, their struggle with hopelessness or a medical system that often provides a patchwork response and treats them with disdain or outright discrimination.

As the group circles back to the square, people shed the headphones and gather for a sharing circle. Some speak of the experience itself, or their own relationship to the toxic drug crisis. Others remain silent or shed tears in someone's arms.

Members of the Walk With Me team offered support and thanks to the people assembled and noted the potential positive ripple effect that might occur from insights folks may have gained during the event.

Christopher Hauschildt, the team's research co-ordinator, in particular thanked young people in the group, noting they are a particularly powerful force for change.

The day's walk marked his fourth anniversary of sobriety, he said.

A better future is possible despite experiencing issues with substance use and every small act of kindness has the potential to be a life-changing moment, Hauschildt said.

“It took a person reaching out,” he said, “making a simple phone call to recognize how I might take my first steps forward.”

If you are experiencing challenges or seeking support related to the toxic drug poisoning crisis, help is available. The Vancouver Island Crisis Society offers a 24-hour crisis line (1-888-494-3888) as well as online chat services and texting (250-800-3806) from 6 to 10 p.m., seven days a week.