Four years after the City of Victoria removed a statue of Sir John A. Macdonald from city hall, councillors will vote on whether it should return the statue to the historical society that originally donated it, at the society's request.

The statue was first erected in the early 1980s and was taken down in 2018 by the city as an intended step towards reconciliation.

"We made a decision early on before others across the country, for many reasons, but I don't regret it at all," said Victoria Mayor Lisa Helps on Friday.

"I think we did it in a respectful way and it's really allowed a conversation to begin to take place in our region and across the country about the complex way in which we have to understand historical figures," she said.

Macdonald was the first prime minister of Canada and was the MP for Victoria from 1878 to 1882. He was also a key figure in establishing Canada's residential school system, which separated Indigenous children from their families and still has profound impacts on Indigenous people today.

On Sunday, the Sir John A. Macdonald Historical Society sent a letter to Victoria Mayor Lisa Helps requesting that the statue, which has been in storage since 2018, be sent back to the society and delivered to a storage site in Ladner, B.C.

It was the culmination of several months of discussion between the society, the city and local First Nations.

The society says its intention in the 1980s was to commemorate Macdonald as a founder of Canada and Member of Parliament for the city. But recent discoveries have caused people across Canada to reckon with the country's past.

"It became apparent to us that the statue itself was an obstacle to healing and reconciliation between the City of Victoria and the First Nations in the local area," said Chris Considine, a member of the Sir John A. Macdonald Historical Society.

"And rather than be a hindrance in any way, the society asked that the statue be returned to it," he said. 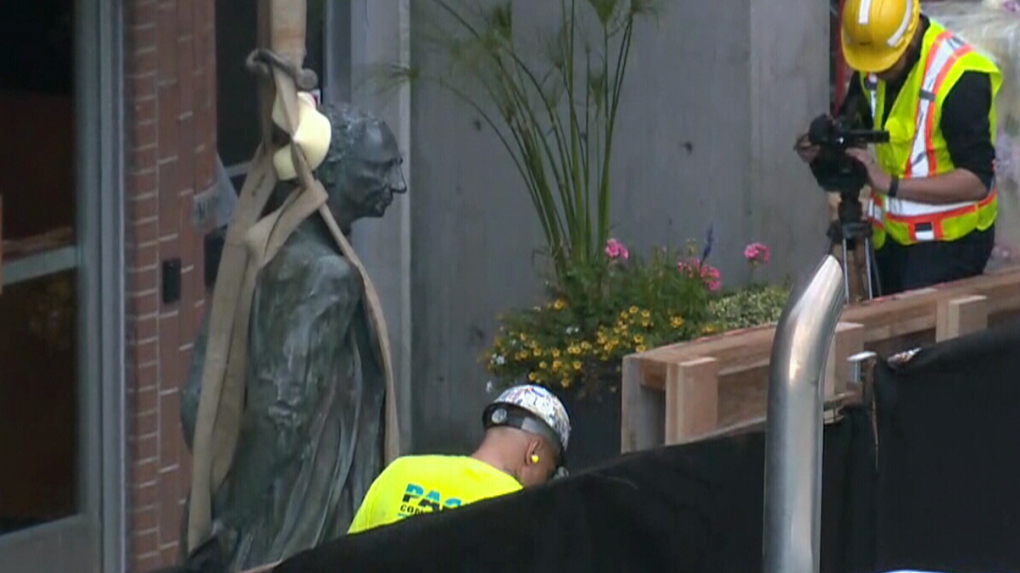 A John A. Macdonald statue is removed from outside Victoria's City Hall, on Aug. 11, 2018.

NO CURRENT PLANS FOR REPLACEMENT

The historical society is not actively looking to place the statue anywhere else, though it says if it does get re-erected in the future, it will add a plaque clearly outlining "the fullest possible educational and contextual information concerning the individual portrayed, his time, his policies, and their consequences."

The historical society also notes that it would not place the statue anywhere on Vancouver Island again, and that it would only be raised if the group had express permission from whichever First Nation whose territory the statue would stand on.

"The society is 100 per cent behind reconciliation," said Considine, noting that he thinks it's important that all Canadians are aware of the good and the bad in the country's history.

Victoria's mayor says she's proud of the way that the city removed the statue back in 2018, especially as other statues were removed or vandalized across the country in recent years.

"When I saw the statues of historical figures being knocked down and beheaded last summer, looking back at what we did in the summer of 2018 – it was controversial at the time, but people across the country have told me, 'You guys were probably a bit ahead of the curve,' and it's always challenging being ahead of the curve," she said.

The motion to return the statue to the Sir John A. Macdonald Historical Society will be discussed at a committee of the whole meeting on Sept. 22.