The event, which brought in hundreds of classic cars and thousands of visitors to the region every three years will not be returning to the Garden City.

"A big thank you to Victoria for all of the bike lanes, Northwest Deuce Days is history," said event creator Al Clark in a social media post earlier this week.

"After 21 years of hosting the event we have decided to call it quits. Thanks to everyone that supported it," he wrote.

Clark told CTV News that the decision to end Deuce Days was not an easy one, but the amount of work involved in hosting the event and the age of volunteers was beginning to weigh on the car show.

"It just got to the point that a lot of the volunteers are getting up in age," he said. "Not that they don't want to help anymore, but physically they can't."

He added that the COVID-19 pandemic added a wrinkle to planning the car show, which requires tens-of-thousands of dollars and roughly two years to organize.

"You don't want to start planning something and then find out you can't even go on," said Clark.

The most recent Northwest Deuce Days occurred in the summer of 2019, when approximately 1,400 cars – many of them dating back to the 1930s – flocked to Victoria.

Participants came to the island from as far away as the southern U.S. and New Zealand, driving or shipping their prized cars across the world.

"I would never have expected that kind of turnout," said Clark. "Seeing all those people show up for a little show in Victoria was great."

The event first began in 1998 with 125 cars on display. It later grew to become an economic generator for the region, creating sweeping demand in downtown hotels whenever the event took place.

"We would never have been able to pull it off without the help of all the volunteers," he said, adding that 150 volunteers participated in the 2019 event.

Some 90 of those volunteers were up at 3 a.m. before the most recent Northwest Deuce Days to park all of the vehicles across downtown Victoria, said Clark. He added that Tourism Victoria helped organize registration for the roughly 1,400 vehicles in attendance in 2019.

While Clark says that the classic cars were obviously a key part of the event, he says one of the aspects he'll miss the most is meeting people from across the world.

Now that Northwest Deuce Days is in his rearview mirror, Clarks says he plans to "play a little more golf." 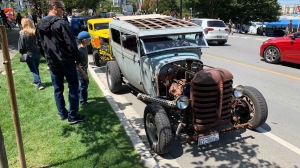