Victoria's crime severity index (CSI) score was the highest out of all municipal police agencies in B.C. in 2020, according to newly released data from Statistics Canada.

The CSI is calculated based on the number of police calls in a community and the severity of each reported crime.

On Tuesday, Statistics Canada released its crime severity index, which placed Victoria's CSI at 168 points. It is the highest score out of B.C.'s 13 municipal police agencies and well above the provincial average score of 96.

"The newly released Statistics Canada data reflects a severity of crime in the City of Victoria that is unacceptable," said Victoria Police Chief Del Manak in a statement Tuesday.

"Our department is committed to doing everything we can to reduce Victoria’s crime severity index, and I look forward to working with our partners in the region to achieve this goal," he said.

Manak added that despite the rise on the index, he was "proud of the work of our officers who continue to respond to a number of high-priority, resource-intensive calls on a daily basis with an unwavering dedication to public safety." 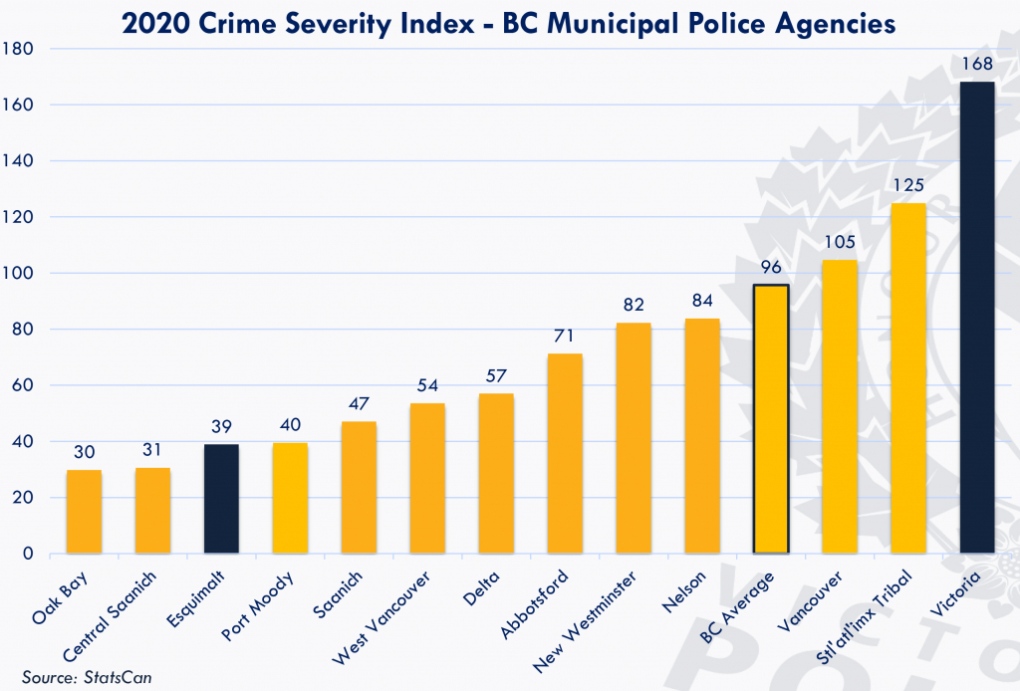 The Victoria census metropolitan area CSI was calculated at 76 points this year, just above the national average of 73.4, according to Statistics Canada.

The total marks a three per cent increase compared to 2019, and marks the fourth largest increase out of all census metropolitan areas across the country.

According to Statistics Canada, most CMAs across Canada saw a decrease in their CSI during the COVID-19 pandemic, but that was not true across the board.

The Victoria Police Department says it believes the steep rise in the city's CSI compared to the census metropolitan area's CSI is due to a higher concentration of activity in the downtown core compared to other communities in the Capital Regional District.

The police department says it faces the brunt of the region's social disorder concerns compared to other CRD communities that are "primarily suburban municipalities."

"As the jurisdiction with the highest urban density in the region, the largest number of liquor seats, the significant majority of multi-unit residential temporary housing facilities, and being the provincial capital of B.C., Victoria is a unique, urban policing environment," said the police department.

VicPD says it continues to support amalgamation with other CRD police departments, a move that would better "unify" resources in the region, according to Victoria police.