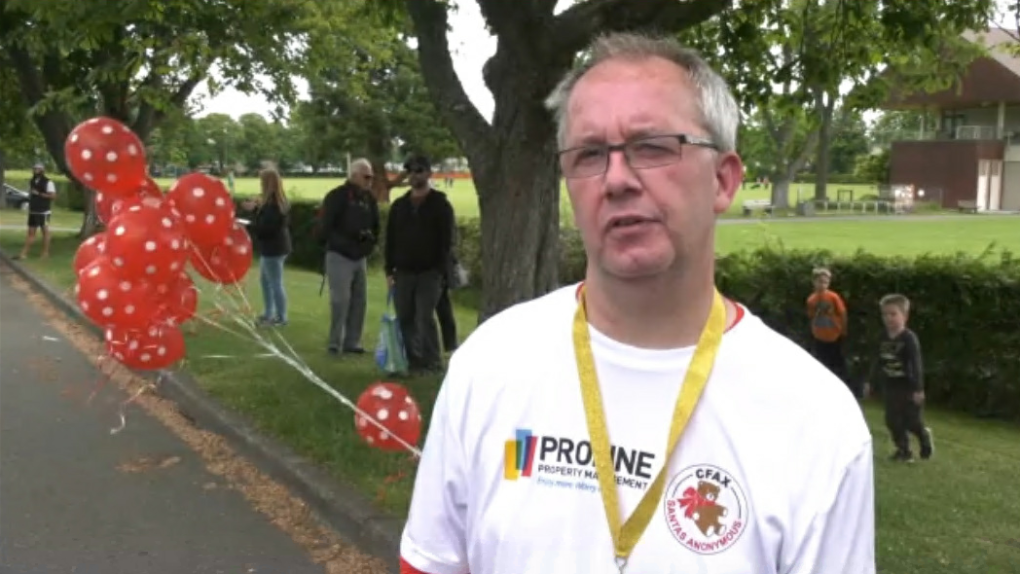 Al Ferraby speaks to CTV News Vancouver Island after completing his solo half marathon in 2021. (CTV)

A funding drive on CFAX 1070's "Mornings with Al Ferraby" raised a whopping $36,221 for Santa's Anonymous on Friday.

Radio host Al Ferraby asked listeners to donate one dollar for every kilometre he runs in Sunday’s Oak Bay Half Marathon, for a total of $21 for 21 kilometres.

CFAX Santa's Anonymous Society is one of Greater Victoria’s longest-running children's charities. It facilitates special grants programs and is best known for helping families at Christmas with hampers filled with food and gifts.

"[It's] really incredible and really heart-warming to see the response we get from our community," said Ferraby after the show.

"Sometimes it’s a struggle, sometimes people don’t have a lot, but people still come through and people still believe in helping others," said Ferraby.

"Santa's Anonymous and all the work that CFAX has done to promote this charity, it's there for families in the region," said Horgan over the phone Friday.

Ferraby said he will do his best to finish the run as he’s struggling with a few injuries and will either walk to the finish line or complete the run at another time.

More details about the fundraising run can be found on Ferraby's donation page.

U.K. Prime Minister Boris Johnson has agreed to resign, his office said Thursday, ending an unprecedented political crisis over his future that has paralyzed Britain's government.

Brittney Griner trial in Russia resumes amid calls for U.S. to strike deal

Jailed American basketball star Brittney Griner returns to a Russian court on Thursday amid a growing chorus of calls for Washington to do more to secure her release nearly five months after she was arrested on drug charges.

Patrick Brown to remain on Conservative leadership ballots despite disqualification