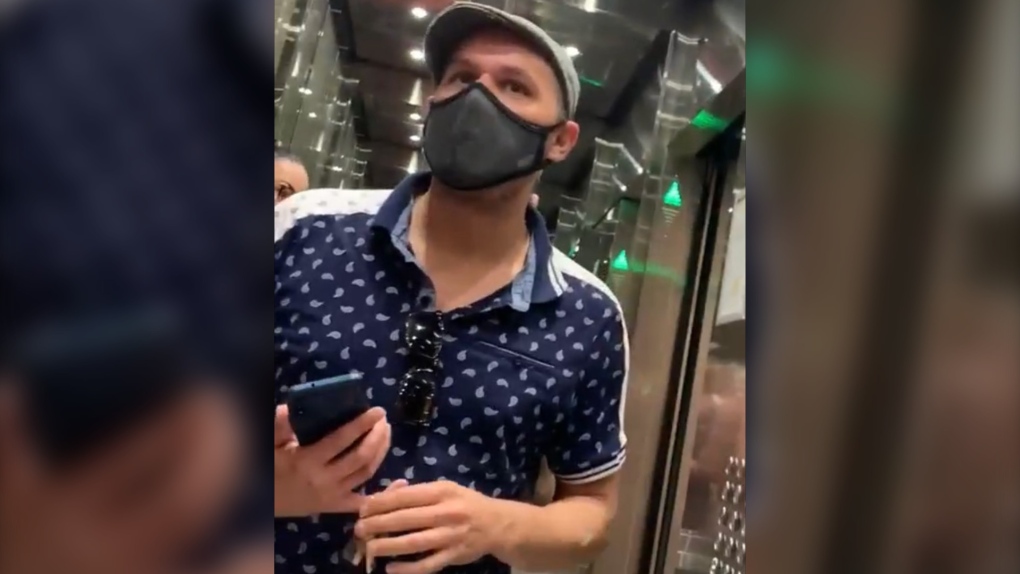 Police released a photo of the suspect in the second incident. (VicPD)

The two men are suspected in "at least 10" incidents, though the Victoria Police Department only provided descriptions of two such cases in a news release announcing the arrests.

The first incident was reported to police in June, but began on March 28, when the victim responded to a Craigslist ad offering a suite in a multi-unit residential building in the 1600-block of Quadra Street for rent.

"The fraudster called the victim’s references and an agreement was made with the victim, who signed what they believed to be a valid lease agreement with a May 15, 2022, move-in date," police said in their release.

"The 'owner' then contacted the victim and explained there had been a flood in the unit and that the move-in date would have to be delayed by a month."

Eventually, the fraudster provided the victim with a fake key fob that would supposedly "take a few days" to activate, but didn't actually work, police said. The victim later learned that the suite they had been shown was actually a short-term vacation rental.

In the second example case, Victoria police said the victim also responded to a Craigslist ad, this one for a unit in a building in the 800-block of Yates Street.

As with the previous incident, the fraudster met with the victim and showed them a suite in the building, then checked references and signed a tenancy agreement, with the victim transferring funds for a damage deposit and first month's rent.

In this case, the victim became suspicious and contacted the building's property manager, who also contacted the fraudster and arranged to see the unit, police said.

"The manager met with the suspect and realized that a rental fraud was taking place," the VicPD release reads.

"They confronted the suspect and, in an effort to assist the victim in recovering their funds, put the victim on speakerphone to arrange return of funds and recorded the encounter. While the suspect agreed to return the funds before leaving the unit, no funds have been returned to the victim."

Victoria police said these two incidents are emblematic of the types of rental frauds they've been seeing, several of which they believe have been perpetrated by the two men they arrested.

Police released a photo of the suspect in the second incident, who they said was wanted on a warrant for violating conditions related to 36 previous fraud charges. They are now asking anyone who has been scammed by him to come forward.

"Given the man’s extensive history of fraud charges and convictions, and the number of victims in the current series of frauds that officers are investigating, investigators are concerned that there may be additional victims," police said.

Investigators describe the man as white with dark brown, "stubble-length hair." He stands 5'8" and wore a medical mask, a "newsboy" style hat, tight jeans, a button-up shirt and a necklace when meeting with victims. He also had painted fingernails, police said.

According to VicPD, he is a suspect in at least nine similar incidents.

Both of the arrested suspects have been released with conditions and scheduled court dates, police said.

Anyone who recognizes the man or has fallen victim to a similar rental scam should call the VicPD Report Desk at (250) 995-7654, extension 1, police said. Tips can also be provided anonymously via Crime Stoppers.