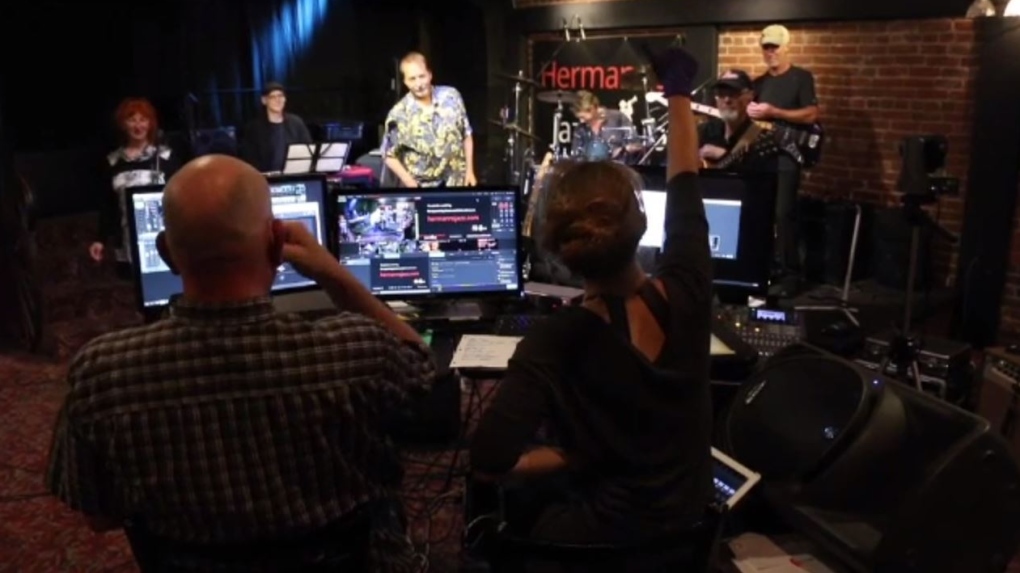 Hermann's Jazz Club is pictured during a virtual concert.

One of Victoria’s iconic music venues is reaching out, asking for financial help from its loyal followers and patrons.

Hermann’s Jazz Club has been showcasing local, national, and international blues and jazz musicians for over 40 years in B.C.'s capital.

Recent COVID-19 restrictions have forced the jazz club, which has a restaurant and ticketed venue licence, to operate at 50 per cent capacity.

The reduced capacity plus surging COVID-19 cases means in-person ticket sales have been decimated as of late, leaving the club scrambling to keep the lights on.

Hermann’s has been livestreaming concerts by donation since the beginning of the pandemic, as well as hosting live audiences as permitted by B.C. health regulations.

But the club says revenue streams have dwindled in the past two months, and government subsidies aren't enough, leaving management no choice but to turn to the public for help.

"It’s our first and only appeal through the pandemic," says Ashley Wey, manager and artistic director at Hermann’s Jazz Club.

"This wave has hit us the hardest and what we are asking for really is support to help us with operational capital to help us be able to pay staff and get food to serve."

"We’re all really worried about the artists and how they are going to pay rent, but also the venues have been hit so heavily, it’s really tough to keep going."

Hermann’s Jazz Club is run by the Arts on View Society, which was incorporated in December 2016 for the purpose of preserving the iconic jazz club.

The society’s goal is to enhance the public’s appreciation of jazz music through all-ages live performances.

Wey first started coming to the club at the age of nine with her dad, who was friends with Hermann, and later became a musician and entertainer herself, travelling around the world performing.

She continues to perform at the club as well as mange it, saying it’s like her second home – and for the community, a cultural center.

The cause is close to her heart.

"We aren’t planning on shutting down, but this is a cry right now from us asking the community for support and donations to keep us going."

If you want to support Hermann’s Jazz Club and the musicians that perform there, donations can be made through the Arts on View Society.

The 18-year-old gunman who killed 21 people at a Texas elementary school walked in unimpeded through an apparently unlocked door, a law enforcement official said Thursday. The gunman was apparently inside the building for at least three-quarters of an hour before U.S. Border Patrol agents stormed a classroom and killed him.

Multiple Toronto schools were in lockdown after a male was shot near an elementary school in Scarborough’s Port Union area on Thursday afternoon, first responders and an eyewitness said.

Quebec ready to vaccinate against monkeypox as soon as Friday, with 25 confirmed cases

Quebec says it is ready to vaccinate people who have come into close contact with monkeypox as soon as Friday.

Health experts say that the monkeypox virus isn’t likely to have a similar impact to SARS-CoV-2, mainly because it isn’t a new virus and doesn’t spread the same way.