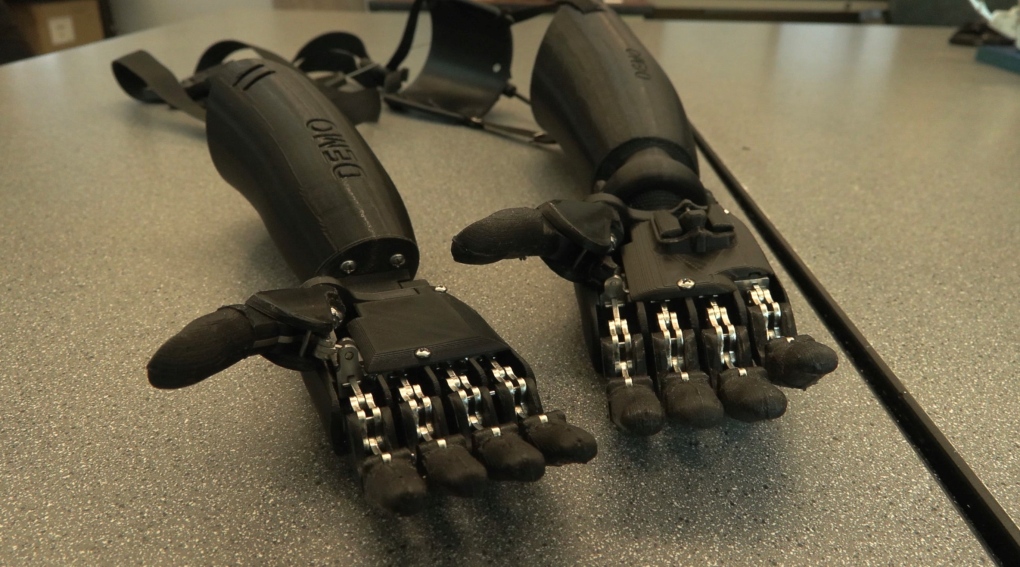 The prosthetic arms are able to open and close through shoulder movements. (CTV)

Inside the engineering lab wing at the University of Victoria is a team of engineers working to make a difference in developing countries. The Canadian charity is called the Victoria Hand Project.

The prosthetic arms are able to open and close through shoulder movements.

“The reason why we use body-powered devices is that it keeps the costs much lower,” said Peirone.

The cost is roughly $300 to produce a device to help a person in need of prosthetics in one of the eight countries where the hand project currently operates.

Peirone said the ongoing war in Ukraine has the charity looking to add a ninth country to its list.

Dramatic injuries to both soldiers and citizens in Ukraine are happening daily.

“Earlier today, I was speaking to another group that is helping in the region and they said that it could be around 10,000 people that need prosthetic limbs,” said Peirone.

The engineering of the arms happens on the UVic campus. The printers and materials are sent to the different countries for manufacturing, creating jobs and allowing local clinicians to properly fit the arms.

The charity is now looking for contacts in Ukraine that will help it to establish an operation in that country.

“It’s very rewarding to have worked on a project and see it have an impact on peoples lives,” said Kim Arklie, lab researcher with Biomedical Systems Design Lab and the University of Victoria.

Arklie helped design the hands. She has seen the impact that a prosthetic arm can have on someone’s life.

“I think getting into Ukraine will make a significant difference in people's lives there and give them the opportunity to have low-cost prosthetic care,” she said.