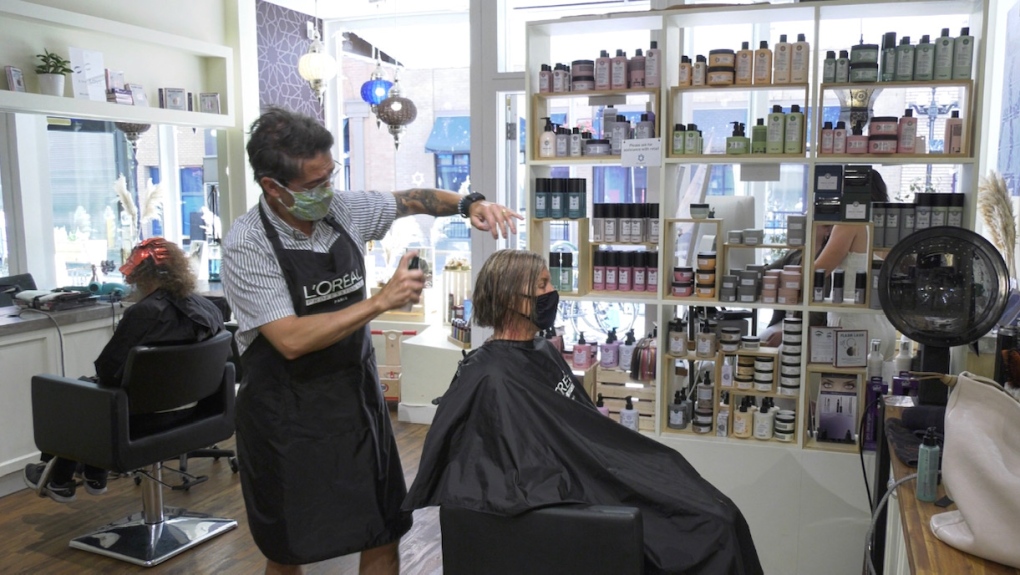 The Natural Hair Salon co-owner Phillip Ferreira puts the finishing touches on a clients hair. The Victoria business will be holding a fundraiser for Beirut on Saturday: (CTV News)

VICTORIA -- A downtown Victoria hair salon wants to help the victims of a devastating explosion in Beirut that left at least 149 people dead, thousands injured and more than 300,000 people homeless on Aug. 4.

A fundraiser called “Beauty for Beirut” will be held at the Natural Hair Salon on View Street on Aug. 15 to support medical efforts in the ruins of the Lebanese city.

One hundred per cent of proceeds from the sale of all beauty products sold at the salon or online at the salon’s website on Saturday will be donated to Doctors Without Borders and its members in Beirut.

“Thinking globally, its about really being thankful for what we have but also sharing what we have. That’s an important value at our salon,” she said.

The owners of the salon jumped at the idea of a fundraiser when it was suggested by a staff member.

The salon says that Doctors Without Borders was chosen because of the aid organization’s connection to Canada and the group’s reputation for swift responses in crisis situations.

“In my research I found almost all the money donated goes directly to the cause that they are working on,” said Grunberg-Ferreia. “They are also on the ground in Beirut already, so it was an easy choice.”

A live jazz quartet will be playing in front of the salon and tables will be set up for the sale of beauty and hair care products.

People can also donate or purchase beauty products that go towards the fundraiser on the salon’s website here.

“We haven’t done something like this before but I think it is reasonable that we could give $500. And while that may not seem like a lot, I think it is a good start,” said Grunberg-Ferreia.

“It’s going to go straight to the people right away and maybe $500 is not a lot to us but in Lebanon it will probably go a long way.”

Beauty for Beirut comes one week after a Victoria restaurant hosted a fundraiser for Beirut, which raised more than $21,000 through the sale of falafels.