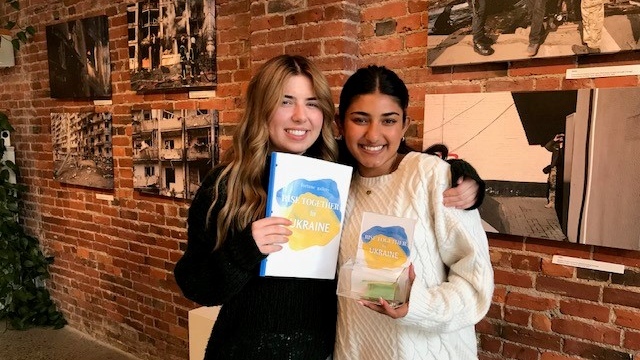 A new fundraising exhibit for Ukraine has opened at Victoria's Fortune Gallery, and it features work from local artists as well as President Volodymyr Zelensky's official photographer.

The exhibit, called "Rise Together for Ukraine," includes a silent auction fundraiser, which include 12 photos donated by Ukranian photographer Mikhail Palinchak.

When Palinchak is not capturing images of the president of Ukraine, he's taking photographs on the streets of the country.

He donated 12 of those photos to the Victoria fundraiser, which depict the destruction caused by Russia's invasion, and the resilience of the people living through it. 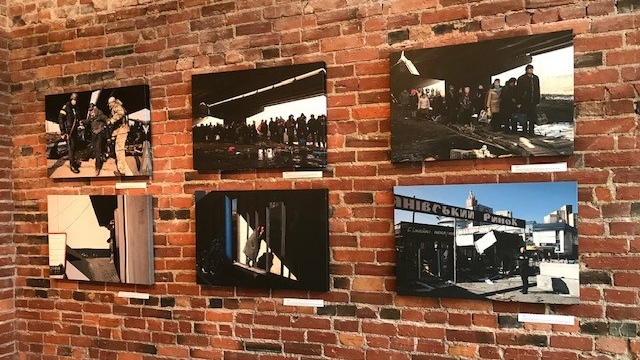 The silent auction fundraiser was organized by a pair of Grade 11 students from Oak Bay High, Holly Smith and Trishna Gill.

The pair co-founded Rise Together, a collaborative charity in Victoria that has helped many in the community since its inception last year. 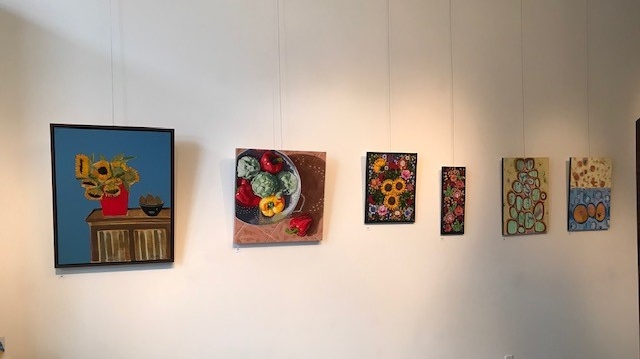 Work by local artists at the fundraising exhibit are shown. (CTV News)

"It’s not just for the purchasing of the artwork," said Gill. "It’s to really let people see the photographs, to see what’s happening, just a little bit more awareness."

"I hope that people can appreciate the photographs and the people who are currently in Ukraine right now," added Smith.

The high school students sifted through dozens of Palinchak’s photos, narrowing it down to 12 that really spoke to them, then had them reprinted onto canvas for the exhibit.

"It’s devastating to look at," said Smith, "I thought these 12 went well together. They showed different aspects of the war; people standing, waiting in line to get out of the country, people fighting for their country and the devastation of buildings and homes."

"They give a good representation of what’s really happening in Ukraine right now," she said.

All of the proceeds from the art sale and silent auction will be donated to the Canada-Ukraine Foundation.

"So much has gone bad in the world," said Gill. "It’s a good way of making a difference and helping out – every penny counts."

The Rise Together for Ukraine art exhibit and silent auction runs from May 11 to 13, from noon to 5 p.m. at Fortune Gallery, 537 Fisgard St.

Canadians going hungry: How inflation's hitting some harder than others

Billionaire Elon Musk took to Twitter late on Thursday to denounce as 'utterly untrue' claims in a news report that he had sexually harassed a flight attendant on a private jet in 2016.

The stakes are high as Canadian farmers take to the fields to plant 2022's crop, which some are saying could find a place in the record books as 'the most expensive ever.'

A recent study revealed that COVID-19 rapid antigen tests may be less sensitive to newer variants, leaving some to wonder just how accurate these tests actually are. Experts share how to get the most accurate results when testing for the virus.

A new Canadian study has found that using anti-inflammatory drugs and steroids after injury may actually increase the chances of developing chronic pain.

A whirlwind visit by Prince Charles and Camilla, Duchess of Cornwall, has ended but the calls for meaningful reconciliation with Indigenous Peoples have not.