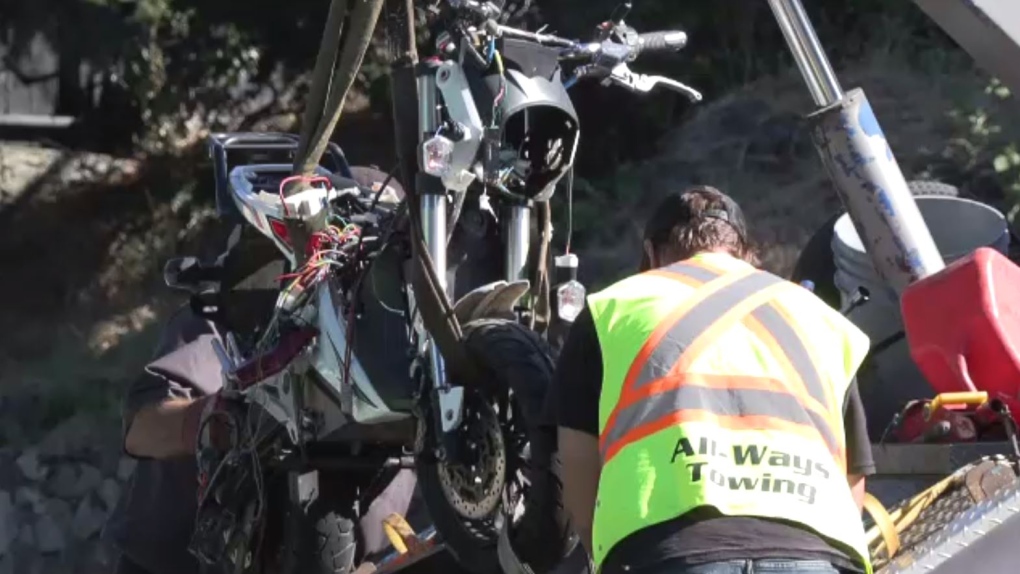 The damaged e-scooter involved in the crash is shown. (CTV News)

Victoria police are investigating what they describe as a "serious collision" between a car and an e-scooter on Wednesday morning.

The turning car hit a man riding an e-scooter, which resembles a motorcycle, who was travelling east on Finlayson Street, according to police.

VicPD officers and paramedics responded to the scene, and the man riding the e-scooter was taken to hospital by ambulance for treatment of "potentially life-threatening injuries."

The man's condition improved later Wednesday and police no longer believe his injuries are life-threatening.

"Thankfully our understanding at this point is he will survive, but very significant injuries occurred as a result of this collision," said VicPD Const. Cam MacIntyre.

Police say the taxi driver is uninjured and is cooperating with investigators.

"The investigation is still underway, but at this point the information that we have is we believe this incident was accidental," said MacIntyre. 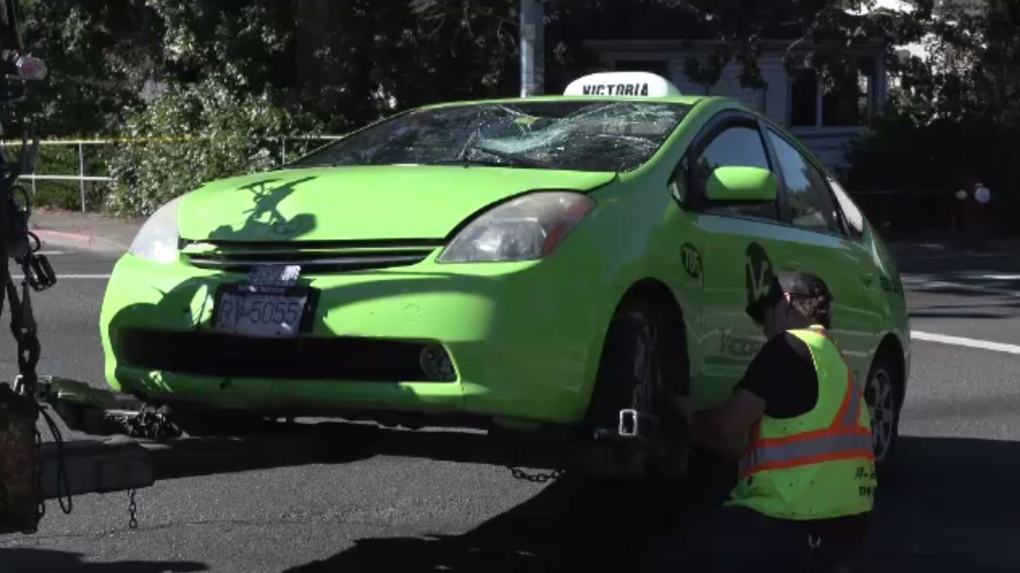 The damaged taxi involved in the crash is shown. (CTV News)

Police are now looking to speak with anyone who witnessed the crash or who may have dashcam video of the collision, starting around 6:45 a.m.

"We believe that there were several vehicles holding at the red light on Cook Street, facing southbound, at the time of the collision," said MacIntyre.

"We're hopeful some of those people will have dashcam footage of this incident," he added.

Traffic at the intersection of Cook and Finlayson streets was closed for several hours following the crash.

Anyone who does witness a serious crash is asked to stay at the scene and contact police, if it's safe to do so.

"Keep your safety first and foremost. If you have to leave the area that's OK, you can call us after," said MacIntyre.

"But if you can remain on scene, if you think you have important information that you think would be helpful for our investigation, we ask that you stay and speak with our officers," he said.

Meteorologist's shocked reaction to Fiona: 'Like nothing I've ever seen'

NTV News' Chief Meteorologist Eddie Sheerr appeared shocked while offering a dour account of the impact post-tropical storm Fiona had on the southern part of Newfoundland and Labrador.

Around 100 Canadian troops deployed to each of N.S., P.E.I., N.L. for post-Fiona recovery: feds

In an update Sunday regarding the devastation of post-tropical storm Fiona in Atlantic Canada, federal officials confirmed that the Canadian Armed Forces are already on the ground in several provinces to assist and are on their way to others.

Over 280,000 Maritimers still without power in Fiona's wake

Strong winds and heavy rainfall from Fiona have left over 280,000 Maritimers still without power, as of 11 p.m. local time Sunday.