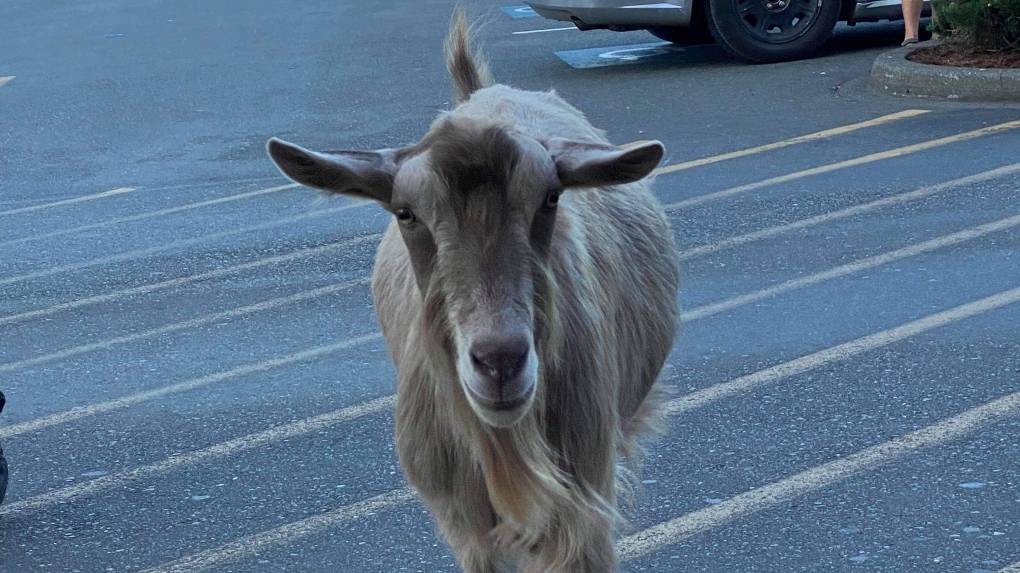 Shoppers at two big-box retailers in Courtenay, B.C., were amused Thursday night when a goat entered a Winners and a Walmart store. (Jocelyn Armitt)
Courtenay, B.C. -

The Vancouver Island community of Coombs may be famous for its goats on the roof but a neighbourhood in Courtenay, B.C., is gaining a reputation for goats on the loose.

Shoppers at two local big-box retailers were amused Thursday night when a goat went on a shopping spree. Despite a pet food store being nearby, he visited both the Winners and Walmart locations instead.

Jocelyn Armitt was at Walmart with her husband looking for items for her granddaughter when she lost her husband inside the store, then found the goat outside.

“It was just passing the parking lot like it wanted to come into the store,” Armitt says. “Everybody kind of let it do its thing and it made its way through the doors and that’s when I lost track of him.”

She says the goat was well behaved and didn’t appear phased by the paparazzi event he was creating.

“People were just kind of giving it distance and wanting to get pictures, it was a nice time had by all,” she says.

Neil Thomsen first thought he was looking at a deer when he saw the animal, but then realized it was a large goat. He recalled seeing a similar instance where the goat was loose last year, so posted images of the goat hoping its owner would know it was on the loose again. This time, it was grazing on some outside landscaping.

“I got a few shots of him standing still and then as soon as I hit the video he starts munching away,” Thomsen says. “(I) got an action video.”

Thomsen’s post – along with others sharing the animal’s antics – got an instant response.

The goat, named Billy, only lives a short distance from the shopping complex and did eventually get reunited with his owner, Eduardo Uranga.

“This is the first time he went in,” Uranga says. “Last time, he got one of the watermelons they had outside and I think he just bumped it and (it) broke up so he just ate it.”

Staff at the Winners location had a bit of a cleanup to do after the goat got a little too excited at the experience and left behind a liquid souvenir of his visit, but they appeared not to mind too much.

“He doesn’t care,” Uranga says. “He just dumps. This guy just does it. That’s why he’s not a house animal.”

Uranga is an advocate for having goats and says they are the most kept animals in the world. He says they are inexpensive to keep, are low maintenance and don’t require a lot of water to exist.

“He’s quite gentle, he doesn’t disturb and is careful and actually he uses the crosswalk” Uranga says.

One person actually snapped an image of Billy using a nearby crosswalk.

He says Billy found his way out through a door that was not properly secured but believes in the end the experience was good for everyone involved.

“The reaction is so good, it’s actually a good thing because all of a sudden there’s ten more people that had a great day,” he says.

Following people’s suggestions Uranga has started a Facebook group for the goat. The group is titled simply, “Billy.”

As Health Canada reviews Pfizer-BioNTech’s application to approve its COVID-19 vaccine for kids aged five to 11, Canadian parents are divided on whether they would vaccinate their eligible children if they could. CTVNews.ca asked parents whether they were planning on vaccinating their children in the event the vaccine is approved for use, and also invited readers to submit any questions they had about the COVID-19 vaccine for children aged five to 11.

Alec Baldwin fired a prop gun on the set of a Western and killed the cinematographer in what the actor Friday called a 'tragic accident.' The director of the movie was wounded, and authorities were investigating.

Not the time to 'freely go wherever,' says Tam as non-essential travel advisory lifts

Canadians should carefully weigh any future decisions on taking foreign trips even though the federal government has lifted a global advisory asking them to avoid non-essential travel, health officials cautioned Friday.

What are prop guns and how are they dangerous? Alec Baldwin incident raises concerns

Firearms experts say it is rare for someone to be killed from a prop gun while filming a movie or TV show, as a weapons master or armorer is mandated to be on set to ensure everyone's safety, in addition to providing rigorous training and gun handling to actors beforehand.

'I am happy they arrested somebody, but I don't think it will help the grief because if they arrest him, [my] son won't come back to me,' said the victim's mom Friday.