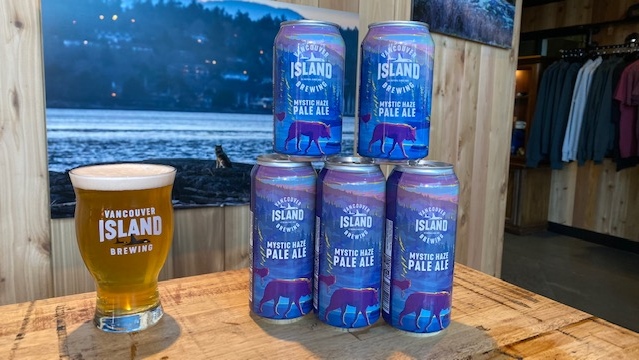 The theme of this year’s Earth Day is, “Invest in the Planet,” and one local company is taking that to heart by brewing up support for wildlife in the Great Bear Rainforest.

The company celebrated the release of the new beer with a one-day event at its brewery on Government Street in Victoria Friday, featuring displays with wolf art, books, live music and more.

The brewery says the limited-edition beer will partially fund conservation work done by Pacific Wild Alliance and its wolf preservation efforts, with one dollar from every beer sale Friday going to the cause.

Conservation photographer Cheryl Alexander, who documented the world-famous wolf Takaya, had her work on display, as did photographer and author Ian McAllister and other artists.

“We were inspired by the work of Pacific Wild and Cheryl with Takaya and we wanted to channel that energy into a beer,” says Jeff Wright, senior marketing manager for Vancouver Island Brewing

He describes the new pale ale as, “really sessionable.”

Friday’s event was scheduled to run until 8 p.m., with live music from 6 to 7 p.m. featuring Aaron Wylder.

“I hope that people are just triggered a little bit to reflect on the role of the wolf in the ecosystem and in our world and how we can better protect them and make sure they continue on,” says Alexander.

“We need businesses like this to be conscious of environmental issues, how they can contribute. That’s why I got involved, because it’s a fundraiser and it’s supporting wolf conservation.”

Mystic Haze Pale Ale will be available as a six-pack box, in single tall cans, and on tap across B.C.

More than half of Canadians say the pandemic negatively impacted their children: report

A new report has found that more than half of Canadian parents report 'negative impacts' on their children after two years of living through the COVID-19 pandemic.

Increased loneliness, isolation a side effect of inflation for Canadian seniors

Canadian seniors are being forced to make tough choices, cutting out frills and nice-to-haves in the face of near 40-year-high inflation rates. But older adults also face a unique, less-talked-about challenge — the increased social isolation that experts say often occurs as a result of high inflation.

Having seen eight coaches come and go in less than 10 years, Manchester United fans know their false dawns. Wednesday shed a different light on strife at the giant football club: Elon Musk said he was buying it -- and then said it was all a joke.