VICTORIA -- Health officials say 12 cases of COVID-19 were identified in the Vancouver Island region over the weekend.

The update comes the same day that health officials and B.C.'s premier announced that the province would be moving on to Step 2 of its reopening plan on Tuesday.

Monday marked the lowest single-day case count since Aug. 31, when 59 cases of COVID-19 were reported across the province.

There are currently 84 active cases of COVID-19 in the Vancouver Island region, according to the BCCDC. Two people are currently in hospital for treatment of the virus, but neither require critical care.

Island Health identified the locations of 55 of the active cases Monday, including 41 in the South Island, seven in the Central Island and seven in the North Island.

Health officials say four people died of the virus over the weekend, bringing the province's death toll to 1,734. None of the victims lived in the Vancouver Island region, where 41 people have died since the pandemic began.

"Our condolences are with the family, friends and caregivers of the people who have died as a result of COVID-19," said provincial health officer Dr. Bonnie Henry and Health Minister Adrian Dix in a joint statement.

Approximately 75.9 per cent of adults in B.C. have now received their first dose of COVID-19 vaccine, or 74.1 per cent of people aged 12 and older.

STEP 2 OF RESTART PLAN TO BEGIN ON JUNE 15

On Monday morning, B.C.'s top doctor joined B.C. Premier John Horgan and other ministers for an update on the province's reopening plans.

The province confirmed that Step 2 of B.C.'s reopening plan will start on Tuesday, June 15.

Step 2 includes outdoor gatherings up to 50 people, unrestricted travel within province, the restart of indoor high-intensity fitness programs and expanded hours for some businesses like bars.

Organized indoor gatherings, such as movie theatres and banquet halls, can also reopen – and indoor worship services can restart in limited capacities.

"We can increase our much-needed connections a little bit more," said Henry at a live briefing on Monday.

The province's top doctor said other health restrictions remain in place, and stressed that not everyone will be comfortable with reopening along the same timeline.

Health officials continue to urge everyone to register for a COVID-19 vaccine and to continue following health guidelines such as physical distancing, staying home if feeling unwell, and keeping social contacts consistent.

"As we bridge to Step 2, the provincial health officer’s orders have been amended to allow for some increases in gatherings in our homes, restaurants and businesses," said Henry and Dix in a joint statement. "However, it is very important to remember that orders and restrictions remain in place."

"Safety plans and masks are still required in all indoor public spaces, as is the need to give others space, to stay home when we are ill and get tested if we develop symptoms," said the pair. 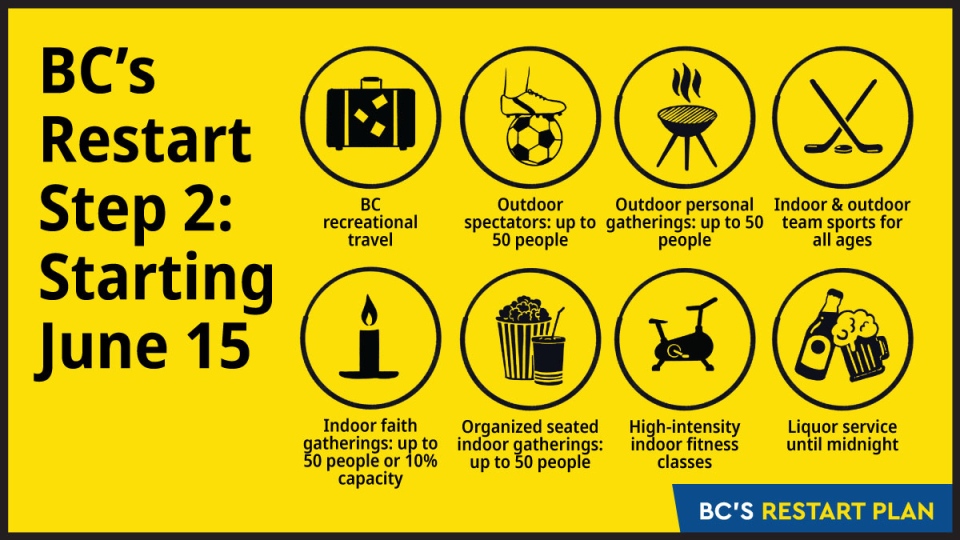 33 flights added to B.C. COVID-19 exposure list so far this week; most since early May