Students at the University of Victoria are exploring and testing the perfect shape to break their next record in a unique sport.

"My short and sweet [description] is, it’s a flooded coffin with a bike inside," said UVic Submarine Racing Club chief engineer, Josh Fernandez.

The submarine capsule has a propeller on the back with a single pilot inside.

The person has to be a certified scuba diver to compete. They wear an air tank and their submarine gets flooded in a pool of water.

They lay down on their stomach with their face staring out a window on the front, their hands on a yoke for steering, and their legs behind on two pedals that propel them forward.

"You can’t talk under water," said dive captain, Kenna Quirk. "So we have to go over hand signals like 'lift the submarine up. Start the propeller.'"

The submarine then traverses a football-length pool in a competition to see how fast the pilot and the design can go. 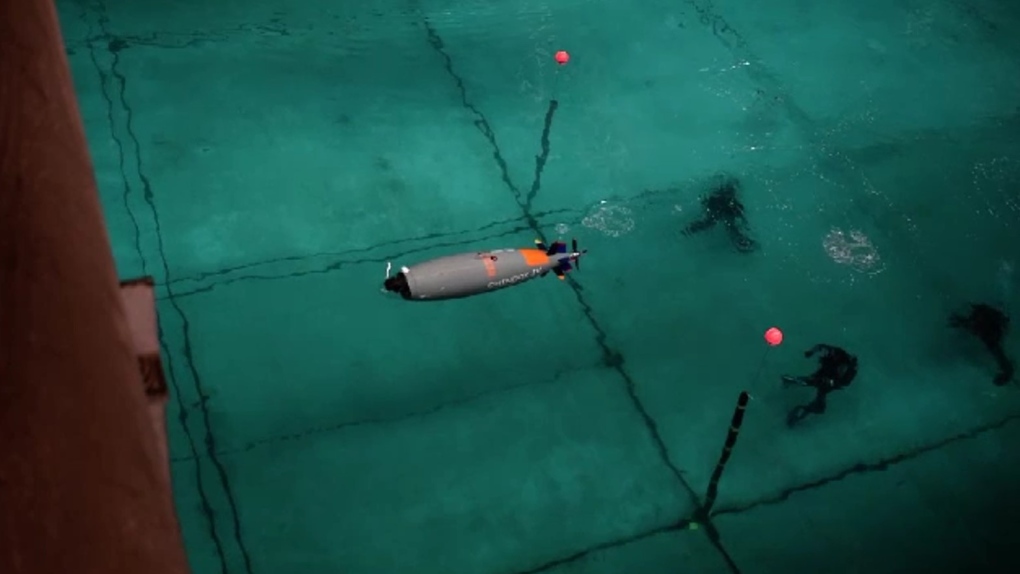 The UVic submarine is shown. (Submitted)

"We basically reached a top speed of about seven kilometres per hour," said the club’s president, Graydon Rourke.

It happened at the team’s last competition in the U.K. over the summer – where the members placed fourth overall.

"Our submarine starts on one side [of the pool]. They shoot down the pool, do a U-turn, and then salmon back – and it’s based off of time and agility," said Fernandez.

The trio of engineering students smile talking about the reactions they tend to get trying to explain their hobby to others.

"We get a lot of shocked people," said Rourke.

For that reason, they say competitions bring a lot of camaraderie – especially around information sharing.

"No one wants to see someone at competition not be able to pass the finish line," said Fernandez.

The UVic Submarine Racing Club says the submarine alone costs roughly $20,000, so they rely on sponsors to keep them going.

The group formed in 2017. Their next competition is in Washington, D.C., in June 2023 – and they’re currently designing a new hull for the event.

Hybrid Parliament should be here to stay, say MPs in new report

The hybrid sitting structure and electronic voting system should become permanent features of the House of Commons, according to a new report from MPs on the Procedure and House Affairs Committee.

WHO declares COVID-19 global emergency isn't over. What happens next?

The World Health Organization decided Monday not to end to the COVID-19 global public health emergency it declared three years ago, even though the pandemic has reached what the international body calls an 'inflection point.'

The rebuild of the Vancouver Canucks has begun, with centre Bo Horvat heading to the New York Islanders.