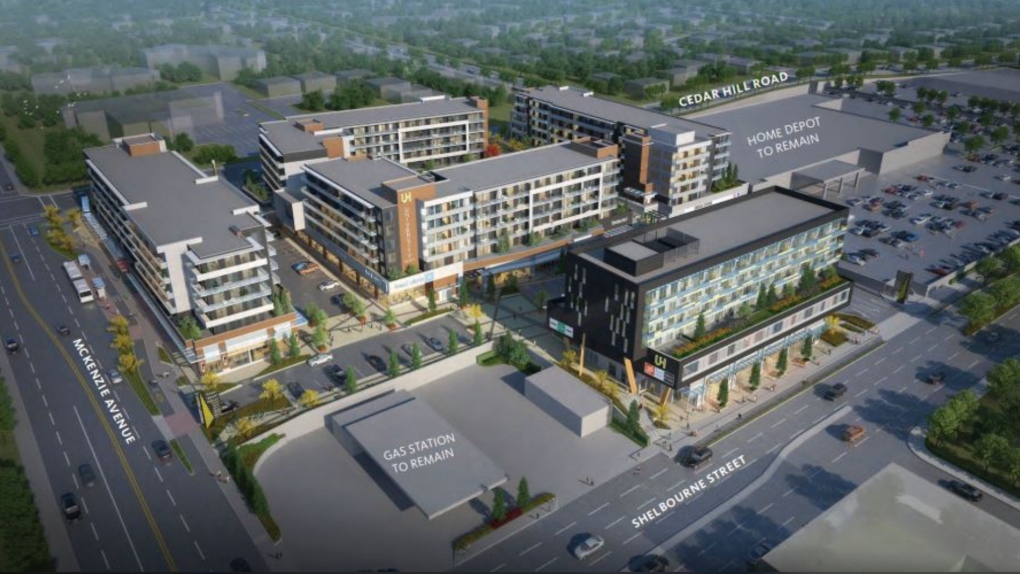 The proposed redevelopment of the University Heights Shopping Centre in Saanich is back on track after the process was put on hold in the fall.

Development company Wesbild says its sweeping plans to redevelop the mall property into hundreds of rental homes and commercial space has been resubmitted to Saanich, after its initial pitch was rejected by property tenant Home Depot.

Wesbild says Home Depot threw a wrench into the redevelopment plans in October by demanding a 10,000-square-foot expansion be included in the project.

Now, Wesbild says that Home Depot will receive its requested expansion as part of the $230-million redevelopment proposal.

"We are pleased to re-introduce this important project which will enhance the community with permanent rental homes, affordable rental suites, much needed daycare spaces and transit infrastructure," said Kevin Layden, CEO and president of Wesbild in a release Thursday.

"Pausing the project to sort out procedural details was the right decision and ensures this development is on solid footing," he said.

The developer says that 60 of the rental units will be earmarked as affordable housing, with monthly rent pegged at no higher than 30 per cent of the average household family income in Saanich.

The property would also include a three-bay BC Transit bus pullout hub, a publicly accessible dog park, a courtyard, a children's play area and a public plaza.

While the proposal has been resubmitted to Saanich, the massive redevelopment still needs to undergo multiple stages of municipal approval and review input from the community.

Wesbuild says if all conditions are met, construction could begin as early as spring 2022.

Construction is estimated to take four years to complete and would create 309 construction jobs and 209 permanent positions throughout the process, according to the developer.

"University Heights Shopping Centre served the community well for decades. But now, with the building at the end of its useful life, this new project will re-energize the entire block for generations to come," said Layden.

Search for Brian Laundrie continues as authorities comb through swampland

As authorities continue their second week of searching tens of thousands of acres of swampland for Gabby Petito's fiance, Brian Laundrie, they are also seeking out new evidence in the investigation.